NMMU Madibaz captain Kurt Duff led by example to scoop the FNB Man of the Match award in the opening game of the Varsity Football tournament against NWU in Port Elizabeth on Monday evening.

Duff, who steered his squad into the finals of last year’s inaugural tournament, said he had no doubt that his team could win the tournament this time around.

The centre midfielder, who has been part of the Madibaz set-up for five years, said the tournament had set a new benchmark for student football.

“I think the standard of Varsity Football is very high and it is one of the most competitive leagues in South Africa.”

After matriculating from Victoria Park High School, Duff went on trial at the Dunfermline Athletic Football Club in Scotland but returned to South Africa after being denied a work permit.

“Fortunately, NMMU football manager Mark Tommy had been following my career progress since school and he offered me a bursary to study and play football for this brilliant institution.”

Duff went on to obtain his BCom Honours degree in accounting and is currently completing a diploma in management studies.

The 24-year-old maintains a rigorous schedule that involves juggling a job, academics and his commitment to football.

“Time management and discipline are the keys to balancing my career, studies and sport.

“Now that I’m working, I train once a day, most days of the week, excluding match days. We have a biokineticist who regulates our training programme to ensure that we stay in top shape.”

He said his commitment and organisational abilities were his most important strengths on the field.

“I always try to give my all and make sure I have my team well organised.”

Duff was born and raised in Woodlands, Port Elizabeth, where his love for football started.

“I’ve been playing since I was five years old, kicking around with my dad in the backyard,” he said.

His hero, Liverpool’s Steven Gerrard, has served as his professional inspiration because of the midfielder’s loyalty, commitment and attitude towards the game.

“My own ambitions are to play for my country and to play at the highest level possible,” said Duff.

“I do not set limits and I would love to play for my beloved Liverpool one day!” 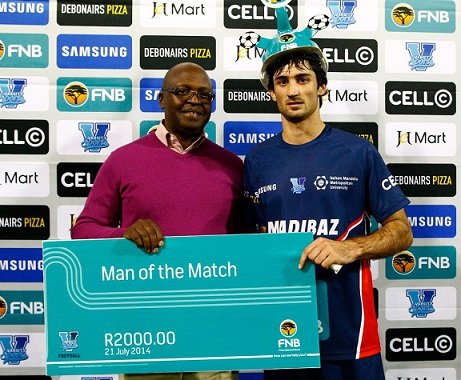