While temperatures in Port Elizabeth plummeted, the competition was hotting up in The Pastryworks kitchens as the metro’s top young cooks vied for the title of SPAR Junior Chef on Tuesday.

The third edition of the regional competition saw three masterchefs-in-the-making create a mouthwatering feast of imaginative dishes to impress the judging panel.

For their first course, the young chefs had to prepare their signature dish, and then put a personal spin on a mystery meal.

According to SPAR Eastern Cape advertising and promotions manager Wendy Westraadt, the purpose of the mystery dish was to level the playing fields by giving each contestant an equal opportunity to make the same meal but add their own individual flair.

She said the three finalists stood out from the many entries they received due to the creativity and originality of the recipes they submitted.

“Their submissions were really interesting and it was great to have three boys competing for the title this year.”

The boys cooked up a storm under the watchful eye of Pastryworks lecturer Kevin Gouws and fellow judges Westraadt and SPAR EC sponsorship controller Roseann Shadrach.

“Each dish was judged according to taste, texture, presentation and level of difficulty,” said Westraadt.

But in the end it was Nagan’s mashed potato balls that bowled the critics over.

“They were unique and decadently delicious. Aside from his culinary skills, Justin’s flair, enthusiasm and presentation really set him apart,” said Westraadt.

“He’s quite determined to become a chef when he grows up.”

For his efforts, Nagan scooped the first prize of R5 000 worth of SPAR shopping vouchers.

Runner-up Goodwin and third-placed Hassim walked away with R1 000 and R500 in vouchers respectively. All three finalists received MP3 players and SPAR hampers as part of their prizes.

Westraadt said the aim of the annual competition was to encourage children to explore their love of cooking and being in the kitchen.

“We want to expose our future shoppers to healthy and exciting eating and to teach them that there are alternatives to takeaway meals and junk food.”

To see photos from the event, find SPAR EC in Action on Facebook. 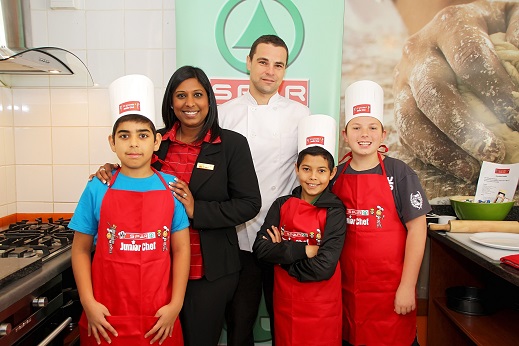