The Billabong Madibaz surfing team will have a score to settle when they take on some of South Africa’s best in their own backyard during next week’s University Sport South Africa (Ussa) tournament.

Seven of the country’s top surfing universities will battle it out from June 25 to 27 on some of the most epic waves that only Victoria Bay – just a stone’s throw from the NMMU George campus – can dish up.

The institution’s Port Elizabeth-based team has dominated this longstanding tournament with successive victories since 2009. They narrowly missed their fifth consecutive title after losing to the University of Cape Town last year.

“We have a strong team and a good shot at taking back the title,” said Madibaz Sport’s aquatic manager Melinda Goosen. “I think we are going to see some fierce competition with an exciting final.”

The two campuses will take on the titleholders, Cape Peninsula University of Technology, Varsity College, Rhodes University and the University of Stellenbosch.

The eight-person teams – comprising both men and women – will go head-to-head in several heats and show off their skills to a panel of Surfing SA-accredited judges who will award points for their manoeuvres.

The team that accumulates the most points will take home the title, while individuals will compete for the tournament’s top male and female surfer awards.

Despite losing the team prize, the Madibaz made their mark in the individual competition last year when George’s Roxy Giles won the women’s category. According to Goosen, she would once again be a force to be reckoned with.

“She is definitely the one to watch. She is in a league of her own and competes on the national women’s circuit.”

In the men’s category, Goosen said she expected a strong showing from Billabong Madibaz number one Josh Saunders.

She said the national Ussa squad, which will participate in international university surfing competitions, would also be announced at the event.

Victoria Bay, which is known for its massive waves, has played host to the event the past four years. Before that, it took place at popular St Francis Bay surf spot Seals.

“We encourage fans of the sport to come out and enjoy some very high quality surfing. Most of the competitors compete at provincial level, so you can expect some really exciting surfing.” 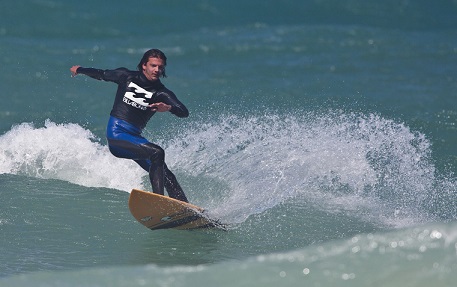 Madibaz surfer Scott Lenton will be in action for the Madibaz during the annual University Sport South Africa (Ussa) surfing tournament, which takes place at Victoria Bay near George from June 25 to 27. Photo: Supplied