More than 4 350 mountain bikers will be part of the festivities when the world’s biggest stage race, the Nedbank sani2c, celebrates its 10th anniversary in KwaZulu-Natal next week.

Organiser Glen Haw said online entries for this year’s event, which follows a 270km route from Underberg to Scottburgh, had once again sold out in a matter of seconds.

“Our final preparations have now been made and we’re looking forward to welcoming old friends and new participants back for another year of thrills,” said Haw.

“Farmer Glen”, as Haw is affectionately known, founded the three-day event in 2005 (with just 247 two-person teams) as a fundraiser for his children’s school.

Since then, the number of participants has doubled every two years, with the 2014 edition set to host 725 teams in each of its trio of races.

“When I started the event, I never ever imagined that it would grow this big,” said Haw.

“Logistically speaking, it has now reached maximum capacity, so we’ve capped the number of entries to ensure that every rider still enjoys a premium experience.”

He said special number boards would be awarded to the 18 members of the exclusive Black Mamba Club who had completed all 10 events.

For the anniversary edition, Haw said the rest of the field could look forward to more great riding and a number of upgrades to the race villages.

“This year, each race village will include ‘The Barn’, where people can gather to celebrate our birthday with a cup of tea and our famous banana bread and more.”

He said community volunteers baked more than 12 000 loaves of banana bread annually to feed the riders.

The community involvement aspect was certainly the standout achievement over the past decade, with more than R20 million raised for schools and organisations along the route, said Haw.

“There has been a tremendous buy-in from the locals and the rural communities have benefited greatly from their partnership with the race.”

In addition to the direct economic spin-offs, Haw said the event employed more than 2 000 part-time workers and 94 service providers.

As far as the future was concerned, he said the introduction of GPS-based navigation in 2015 would be another exciting addition to the event, which had become known for innovations such as its floating bridges.

“This year, we’ll use traditional route marking combined with GPS so that the riders get comfortable with it.”

Although satellite navigation had already been embraced by its two sister events – the BSi Steel Dusi2c and Old Mutual joBerg2c – Haw said the inspiration for these had been the Nedbank sani2c.

“It’s really the way to go. As with all innovations in sport, like the Hawk-Eye in cricket and third ref in rugby, they are accepted slowly but are for the better.

“This is just another exciting new concept for our sport.”

Haw said the festivities would kick off with the three-day Trail event for social riders (May 13-15), followed by the more competitive Adventure (May 14-16) and culminate in the Race component for the pros and serious riders (May 15-17). 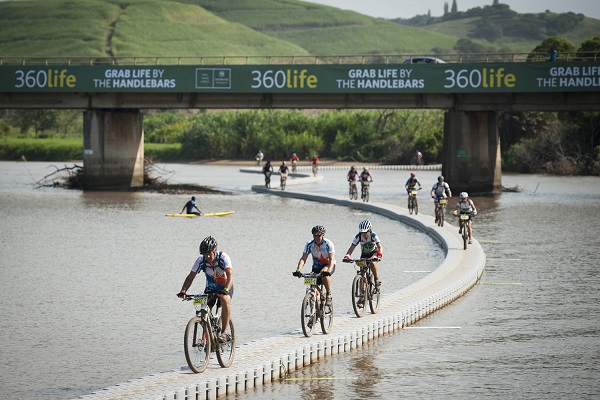 More than 4 350 mountain bikers will take on the 10th edition of the Nedbank sani2c in KwaZulu-Natal next week. The three-day stage race starts in Underberg and crosses a number of floating bridges en route to the finish at Scottburgh. Photo: Cheri Vale