Well-known television presenter and Cape Epic champion in the grand masters category Andrew Mclean will be on the start line of the PwC Great Zuurberg Trek, which starts near Addo just outside Port Elizabeth on May 30.

Mclean and teammate Bruce Diesel will be part of an exclusive field for the three-day mountain bike stage race, which, he says, has the potential to become one of the iconic events in the province.

“It’s absolutely essential for the growth of the sport and it’s a wonderful part of the country to ride in,” said Mclean, who is chief executive officer of a cycling retail chain and host of the popular Supercycling TV show.

“Each region in the country has its signature event – KwaZulu-Natal has the sani2c, the Western Cape has Wines2Whales and now the Eastern Cape has the Great Zuurberg Trek.”

The race offers 200km of challenging riding through diverse scenery – including the Addo Elephant National Park, the citrus orchards of the Sundays River Valley and the Zuurberg Mountains overlooking the Great Karoo.

It starts and finishes each day at the Zuurberg Mountain Village, with riders staying at the resort and adjacent camping ground.

Mclean said the importance of building such events was that the main event and possible spin-offs had the potential to generate economic benefits for the region.

“If I can be a small part of that, I’m very happy; hopefully we can see it grow into another sani2c.” The latter is regarded as the largest race of its kind in the world.

The 49-year-old, who won the masters category at the KwaZulu-Natal event in 2010, said he was still recovering from the illness he battled during this month’s Nedbank sani2c.

He was on devastating form earlier in the season, finishing 15th overall at the Cape Epic alongside German partner Heinz Zoerweg.

“I definitely won’t be as good as I was at Epic. It’s hard to keep that kind of condition anyway, even if you’re healthy.

“Since then I’ve picked up a bit of a bug and had a bit of downtime, and at sani I really battled, so I’m hoping that I’ll be fit and healthy again by next weekend.”

Mclean said he was particularly looking forward to riding the Hayterdale Trails section on day three, where he won the national cross-country title in his age group.

“At the national champs we only got to ride a small piece of it because we did laps, so I’m looking forward to riding more of those trails.”

He said the queen stage on day two, which features over 2 000 metres of climbing, would be more likely to determine the outcome of the race.

Mclean said he and training partner Diesel had done many stage races and “hundreds of thousands of kilometres” together.

Among their shared successes are victories at sani2c (veterans) and the Panorama (overall) road tour in 2009.

They are set to be among the strongest contenders at the Eastern Cape race, which offers a total prize purse of R50 000.

“Bruce is very strong and we know how to look after and get the best out of each other,” said Mclean.

“If one of us is having a bad day, we know what we need to do to make sure that we get to the finish as fast as possible but without hurting our partner.” 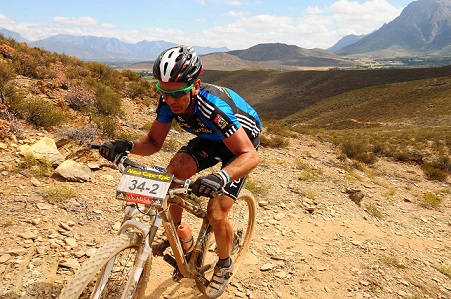 Supercycling presenter and triple Cape Epic champion in his age group, Andrew Mclean, will participate in the three-day PwC Great Trek just outside Port Elizabeth from May 30. Photo: Sportograf