The University of Johannesburg is racing to host the second leg of the four-meet national Varsity Athletics series on Monday, April 14, following a last-minute venue change.

This will be the second time in as many years that UJ will hold the made-for-television event after persistent rain hampered the resurfacing of the track at North-West University in Potchefstroom.

The top athletes from each of South Africa’s eight leading sporting universities will now do battle at the 8 000-seater UJ Stadium in Westdene.

Andreas will line up for the 5 000m this year, after finishing sixth over that distance at the World Student Games in Russia in 2013.

Fellow UJ middle-distance runner Caroline Marandela, who scooped the women’s 3 000m race in the opening meeting at the NMMU Stadium in Port Elizabeth, could make an impact in the 1 500m.

According to UJ sports events manager Niamh Faherty, the high-profile series tried to rotate venues to ensure that all eight participating universities had an equal chance to host.

“UJ hosted one of the events in the inaugural series last year but we are happy to assist Pukke with their dilemma.

“We have a great facility and a very competent team that has experience in hosting this world-class event and making it spectacular viewing.”

The university was the first institution countrywide to build an international quality blue tartan track, on which last year’s event was held.

Senior operations manager Francois Fouché said the laying down and construction of synthetic tracks was a complicated and specialised process.

“The kind of surface you put down makes the difference. In our case, it’s the Conica surface, which is one of the fastest in world athletics.”

Fouché said spectators could also look forward to faster times and better distances than at the NMMU event, which was held at sea level in March.

“The altitude will definitely be a factor, especially in the sprinting and jumping events.”

“The curtain-raisers start at 5pm with all the fun, flair and fireworks supporters have come to expect.”

She said there would be no road closures and that parking would be available in Kingsway Avenue, with a shuttle service to the stadium.

“Local schools and UJ residences have the opportunity to raise funds for their sporting programmes by bringing spectators to the event. They’re welcome to contact us to find out more,” said Faherty.

Tickets are free of charge and available from www.varsitysportssa.com. 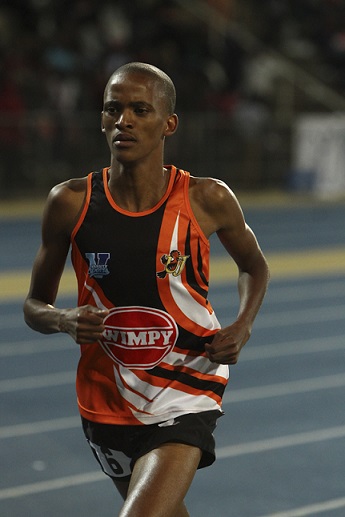 The University of Johannesburg’s Jeromy Andreas will be aiming to repeat a home track victory during the Varsity Athletics meeting at the UJ Stadium in Westdene on April 14. Photo: Supplied