After an early season of working towards team goals, David Maree will be hoping to defend his title at the Emperors Palace Classic in Johannesburg on Sunday, April 13.

The seventh edition of the late autumn event, presented by OR Tambo International Airport, promises top-flight racing as many of the country’s pro teams will have completed the five-stage Mzansi Tour the previous day.

“My legs will surely be sore after the tour, which isn’t ideal,” conceded Team Abantu’s Maree, when asked about the possibility of back-to-back titles in the one-day classic.

“But the tour also gives you a mental advantage, having raced the previous few days and having been in that frame of mind.”

The Bryanston-based all-rounder said he would definitely be targeting a second victory in the 102km feature race, which starts and finishes at the casino resort.

“There are a few good hills on the route that play to my strengths and will give me the opportunity to gain some time over the bunch.

“If the race is in our favour and I manage to stay away with a few strong riders, then there’s a good chance for me to win.”

Should it come down to a bunch sprint, he said a fast man like teammate Nolan Hoffman – who has already won the green jersey in the Bestmed Tour de Boland and the Argus title this season – would be more likely to take it.

Maree has been something of a dark horse this season, not appearing on the podium but helping his teammates to some high-profile results.

Most notable was his powerhouse display over Suikerbossie that helped set up Hoffman’s maiden victory in the Argus last month.

“I had a very good ride at Argus and I’m very happy that we won the race,” said the 24-year-old.

“We’ve just come back from a training camp in Nelspruit and I’m feeling confident about my form.”

Although Maree has been going well since the start of the season, he has had some bad luck along the way, including puncturing out of the break at the Carnival City Macsteel Classic in February.

That will not deter him however from his focus on retaining the king of the mountains jersey at Mzansi Tour.

“I’m setting my sights on a top five in the GC. Last year I was second on stage two, so as a bonus I would like to win one this time.”

The Emperors Palace Classic will finish off with a European-style criterium as a special treat for spectators.

More than 6 000 cyclists are expected to turn out for the weekend festival that starts with the mountain bike races on the Saturday and concludes with the road and criterium races on the Sunday. 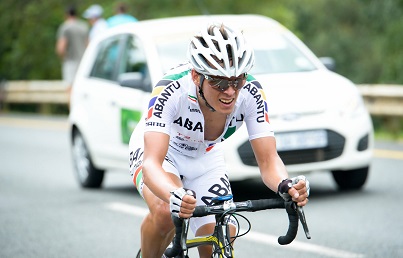 Team Abantu’s David Maree will be aiming to defend his title at the Emperors Palace Classic, presented by ASG, in Johannesburg on April 13. Photo: Supplied