Madibaz judo star Matthew Chase was included in the South African student team after claiming two gold medals at the Ussa championships at NMMU’s Missionvale Campus in Port Elizabeth over the weekend.

Chase, who won gold in the U/60kg and U/66kg divisions, led his team to their first overall title in the annual competition contested by the country’s top six tertiary institutions.

The Madibaz’s medal tally of 16, which also included four silvers and 10 bronzes, saw them finish ahead of Tuks and Maties after two days of intense competition.

Chase, who was named the most promising male athlete, said the event was one of the major ones on the calendar and featured the top judokas in the country.

“I am very happy with my results,” said the 20-year-old, who had trained twice daily in the lead-up to the tournament. “To keep my sports bursary, I need to perform at my best.”

The first-year electrical engineering student is no stranger to success after placing third at the African Junior Championships in 2013 and 2014.

According to NMMU martial arts manager Bernard Petersen, the Madibaz’s success could be attributed to “a collective effort” and the hosts duly received the most spirited team award. 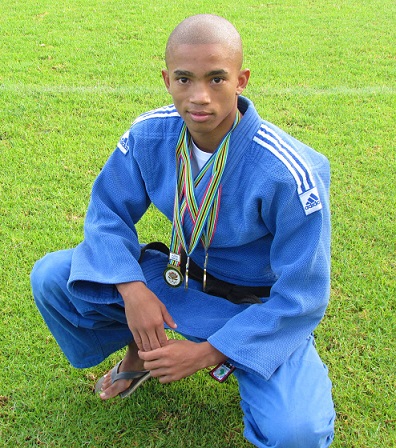 Madibaz’s Matthew Chase has secured a place in the South African student team after winning two gold medals at the Ussa championships at NMMU’s Missionvale Campus in Port Elizabeth over the weekend. Photo: Supplied