Race co-ordinator Craig Wapnick said this year’s event would feature a 400m floating bridge across the dam in place of the traditional Chinese dragon boat crossing.

“It’s probably one of the longest mountain bike pallet bridges in the world,” said Wapnick.

“The dragon boats will be missed but we felt it was time for a change, because the riders want to get going as soon as possible.”

He said the stage would remain untimed, as participants prepared themselves for the 880km journey ahead.

“It’s still a chilled day for people to unwind, get used to the GPS and just enjoy the first day away from normal life.”

“The idea stemmed from the success of the inaugural Dusi2c race. The sense of adventure is incredible and the route remains pristine, with zero impact on the environment.”

He described the route as “quite linear” and therefore fairly easy to navigate.

“Riders can’t really take short cuts as they will be off the route, so it’s not in their interest to cheat.

“If they try to take major detours by missing whole sections, they will be very embarrassed when we give them the Birzman Tool of the Day award and they will be disqualified from the race.”

Wapnick said the commitment of route sponsor N3 Toll Concession for the third year in a row had made a number of additional route changes possible.

“There’s a whole new section on day two and a big change on day three that eliminates 15 kilometres of district road and replaces it with some awesome backcountry riding.”

He said riders would no longer go over the top of Spioenkop on day six but through the “nek” instead, which offered the reward of more bush single-track.

“There are many parallels, both literally and figuratively, between N3TC’s route and ours.”

The mountain bike route runs parallel to the N3 for the first five days, through Gauteng and the Free State before plunging off the Drakensberg escarpment into KwaZulu-Natal. The race finishes on the beach at Scottburgh.

“Even though the Old Mutual joBerg2c is a genuine race, it’s probably one of the best ways to see a large part of South Africa for those who are merely there to ride it. It is a soulful journey across this beautiful country of ours.”

According to Wapnick, the route crossed roughly 100 private farms, with a team of 30 workers dedicated to maintaining the manicured track.

He said highlights included riding through game farms and a wolf sanctuary, past Retief’s Klip and descending dramatically into the Umkomaas River Valley.

“There are not many routes where riders ride every kilometre without going in circles, where the route is practically off-road from start to finish and where the emphasis is on a great mountain biking experience throughout.” 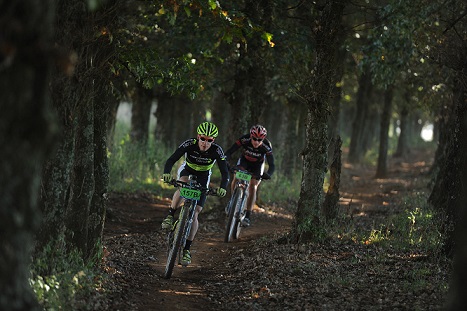