The FedGroup Berg & Bush is set to give talented youngsters their first real taste of stage racing by allowing teenagers to participate in the two-day mountain bike event in the Central Drakensberg on October 18.

According to Cycling South Africa regulations, riders aged 15 to 18 may only participate in a maximum of three stages, which cover no more than 60km per day.

“We are really excited about being able to cater for teenagers at this year’s event.”

Green said the two-day event had always been a family occasion, as children would usually accompany one parent as supporters, while the other rode.

He said the demand from eager parents to include their teenage children in the racing had become an annual issue.

“Previously the first stage was 63 kilometres, so special permission had to be obtained and many were disappointed.”

Green said there were very few other stage races on the national calendar that offered this opportunity for youth category riders.

“The two-day route is a perfect mixture of farm and cattle tracks, a few swooping smooth descents, some long climbs which aren’t too steep, and shorter technical sections that are rideable for the average cyclist.”

“We’ve always had fun categories, with trophies presented for the top parent and child, husband and wife, and sibling teams.

“This year we are introducing a parent and teen prize category, as well as the Tread buffalo category for heavies!”

As parents of three children who had all competed in provincial sports, Green said he and his wife Nicky appreciated the need to encourage teens to enjoy a healthy love of sport instead of “hanging around in shopping malls”.

“We can imagine a mum or dad’s pride in being able to stand on the podium with their youngster.

“Hopefully sharing this two-day adventure for the first time will be something the family remembers for years to come.”

The eighth edition of the FedGroup Berg & Bush starts with the Descent on October 10, followed by the Great Trek on October 14 and wraps up with the two-day race on October 18. 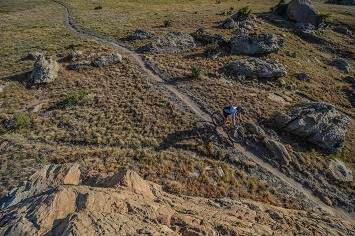 The FedGroup Berg & Bush will give teenagers their first real taste of stage racing by allowing them to take part in the two-day mountain bike event in the Central Drakensberg on October 18. Photo: Kelvin Trautman