FNB Madibaz head coach David Maidza said his side had done their university proud after a 45-29 maiden victory over FNB Maties in the FNB Varsity Cup, presented by Steinhoff International, on Monday evening.

“Overall, I thought the boys did very well for the first game,” said a cautiously optimistic Maidza.

“We went out and executed what we wanted to do, we stuck to a lot of our structures and we played as a team. I’m very happy about that.

“But there will always be things to work on and there are a few things we need to tie up.”

The Port Elizabeth side delighted local fans with good driving play that saw them open the scoring with an unconverted try in the first three minutes of the game.

Controlling possession for most of the first half, they followed up with two converted tries to take the score to 21-0 at half-time. Under Varsity Cup rules, conversions count an extra point.

“I thought the forwards really laid the foundation and put us on a good footing,” said Maidza.

“When you score tries like that and your kicker is kicking well, it deflates the opposition with those extra points stretching the lead and not giving them opportunities to come back.

The NMMU coach said his side then took the game away from the Western Cape outfit by defending well on their own tryline and stretching the scoreline with another goal to take the score to 29-0 early in the second half.

“In that, there was a lot of character shown by the players and hopefully it augurs well for the rest of the season.”

The home side however allowed the FNB Maties back into the game after that, with the Stellenbosch team scoring three converted tries to the FNB Madibaz’ two.

The visitors went over one last time (and failed to convert) in the dying minutes to take the score to 45-29 at the final whistle.

“Whether it was the players tiring or the changes we made, it wasn’t the best of finishes,” said Maidza.

“The tries that were scored against us were not tries that I would like us to concede, especially if we’re in a tighter game than that.”

He said their defensive work and exit plays – especially when kicking away from the pressure zone just outside and inside their own 22 – needed some attention.

“But those are minor things that we can definitely tweak. We need to just keep on concentrating on what we do best and improve on that.”

Maidza said his team’s strong mauling play, which produced five of the six tries, and their ball control through the phases was to be commended.

He said he was happy to come away with a bonus point in addition to the win.

“The first game is now done and dusted. We have to prepare really well for our game against UJ next week.”

He said the Johannesburg team had a good pack of forwards, which FNB Madibaz would have to counter strongly to stem the orange tide.

“We’ve got a good squad that we can always count on. It’s not about the 23 that ran on yesterday, it’s about the 36 players we’ve put together.

“It’s about carrying on the work that was started in this first game. It will count for nothing if we don’t keep on improving every single game.” 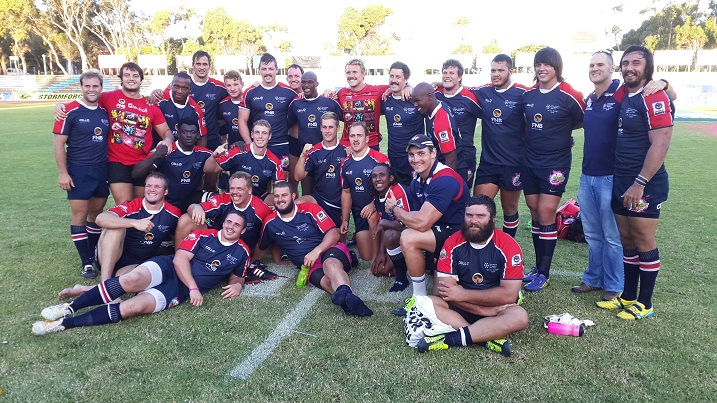 The triumphant FNB Madibaz team celebrate their 45-29 victory over the FNB Maties during the opening round of the Varsity Cup, presented by Steinhoff International, on Monday evening.