A bumper field of almost 350 participants took to the waters in windy conditions for the second annual SPAR Kowie River Mile in Port Alfred on Sunday afternoon.

The open-water event, with its line-up of five races, raised R30 000 for the Sunshine Coast Hospice, which provides home-based care for terminally ill residents of the Ndlambe municipal area.

The feature race in the 14 to 29 age category saw a convincing win by 18-year-old Edward Johannisen of East London in a time of 16:47.

Johannisen, who swims for the Aquanova Aquatics Club, led the field for most of the 1.6km upriver course from the Kowie River Mouth.

“Luckily the wind was at our backs, so we had that help, and the current was with us. I thought to myself, let me just give it my all, and I came out with a win.”

Nelson Mandela Bay’s Miles Rosser (41) took the win in the 30-plus category in 19:52, while his Aquabear Swimming Club team-mate Tracy Gous (37) claimed victory in the women’s race in 20:09.

Another PE resident and provincial swimmer Hannah Haswell (13) was the first junior girl out of the water in 18:02, while David Greene (13) won the boys’ title in 19:45.

Haswell said it was lovely to see the support from holidaymakers and locals, who cheered the swimmers on from the west bank of the river.

For those who could not manage the full distance, there were also the quarter mile (400m) and half mile (800m) options.

According to SPAR Eastern Cape advertising and promotions manager Wendy Westraadt, there had been a large number of late entries on the day.

“That’s quite usual for sporting events in the Eastern Cape and we hope that this particular event is going to grow even further.”

The title sponsor awarded medals to all finishers, with trophies and prize money for the winners.

For more information and photos go to www.kowierivermile.co.za or find SPAR EC in Action on Facebook. 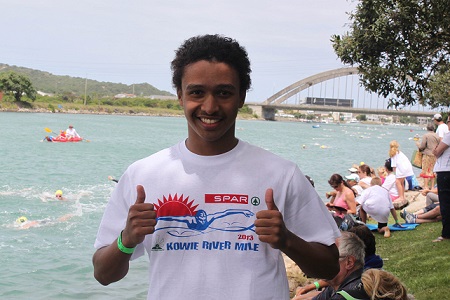 East London’s Edward Johannisen, 18, gives the SPAR Kowie River Mile the thumbs up after taking the win in the 14 to 29 age category in Port Alfred on Sunday.