The Eastern Cape’s future netball stars were treated to instruction from some of the country’s top coaches, as the final SPAR netball clinic for the year played out at De Vos Malan Primary School in Port Elizabeth this week.

More than 400 players from primary and high schools across the province felt the benefit of the seven coaching clinics that took place as far afield as Middelburg, Graaff-Reinet, George and Grahamstown this year.

Aside from improving the players’ on-court skills, the clinics also provided teachers with updated manuals on the latest rules and guidelines for coaches and umpires.

Speaking at the event, De Vos Malan teacher and netball convenor Katie McBean said the clinics were the best thing that could have happened to netball development in the northern areas of the city.

“It means a lot to the children. Some of them have a lot of potential – they can go far one day.”

Herself a former provincial player, McBean said sporting clinics such as this played a vital upliftment role in the Schauderville community.

“We’re so glad because these children really need it.”

According to SPAR Eastern Cape advertising and promotions manager Wendy Westraadt, the retailer had sponsored both the university club and the netball clinics for the past four years.

“Netball is one of the largest women’s participation sports in South Africa and the world, so it is important for us to support the development of the sport at grassroots level.”

Westraadt said the retailer’s commitment to the sport was also evident in its sponsorship of the SPAR Proteas national team, which triumphed in the recent tri-nations test series against England and Trinidad and Tobago in PE. 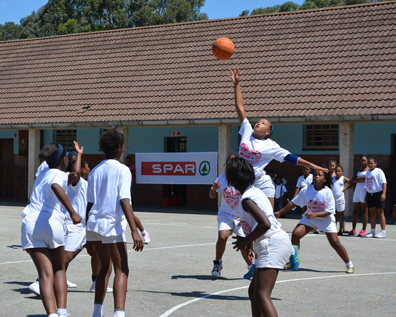 De Vos Malan Primary School played host to the final SPAR netball clinic of the year. The      seven clinics, held across the Eastern Cape, contributed to the grassroots development of    the sport in the province. Photo: Full Stop Communications