Cycling legend Martin Nefdt has reassembled his 1967 Springbok track team as well as a host of local celebrities to partake in The Herald VW Cycle Tour in aid of abused and abandoned animals on Sunday, February 2.

Nefdt and his cohort will be “cycling for the love of animals” in the 55km Pursuit road race through the streets of Port Elizabeth.

The group of 30 sponsored riders will use the event as a fundraiser for the Uitenhage-based SPCA, which serves the entire Nelson Mandela Bay area, including Kirkwood and Addo.

“Everyone I’ve spoken to has been so responsive and really wants to do this,” said Nefdt, who was inspired to cycle for a cause by his brother Louis, who is chairman of the East London SPCA.

“They’re battling with their vehicle and the state funding is pretty poor.”

Nefdt said it broke his heart to see all the kittens and puppies, as well as the donkeys and cows in the kraal.

The group hope to raise awareness and at least R15 000 for the non-profit organisation and will be highly visible on race day in their matching team shirts.

“Unfortunately we’ve had to make a lot of double extra larges because there are a lot of big guys riding,” quipped Nefdt, who runs the local Puma agency.

Leading the bunch on a tandem will be Nefdt, 65, and seven-time South African sprint champion Willie Marx, 70.

In their glory days, the former SA champions and rivals played to capacity crowds at the Westbourne Oval, breaking numerous individual records between them.

Nefdt and Marx were also the last Springbok pair to race the tandem event at the world track championships before South Africa was isolated from international competition.

They will be joined by team-mates Johan Nicol, who was the first SA rider to break the five-minute barrier in the 4 000m pursuit, and former national sprint and road champion Jack Lester. Both are 66.

“Willie runs a bike shop in George and is pretty fit. Johan rides every day down in Wilderness and Jackie, who lives in Joburg, didn’t hesitate either,” said Nefdt.

The foursome competed at the 1967 world championships in Amsterdam but missed their chance to become Olympians when the country was banned from the Games in Mexico the following year.

“We had a lovely camaraderie and now we’re bringing it all back,” he said.

“Hopefully we’re all still alive on the second of February!”

He said NutriTech would provide nutritional supplements to keep their bodies going.

“In our day, the only drugs we used were bully beef and weetbix, so we’ll stick to that.”

He said the four “legends of the pedal” were excited to be leaving a legacy that they hoped would continue in the future.

“I’ve warned them that there’s a sjambok up front for anyone who tries to pass us,” laughed Nefdt.

The group’s race entries will be covered by Cell C.

SPCA volunteer Marizanne Ferreira said everyone at the organisation was excited about the initiative.

“The SPCA in Uitenhage is a forgotten organisation and this initiative will give it some desperately needed exposure.

“No one has ever done something like this for us. It’s going to mean a lot for the shelter that someone of Martin’s calibre and profile is doing this.”

She said the local branch rehomed between 20 and 50 dogs per month; many of them purebred animals confiscated from illegal “back street” breeders.

“We have around 100 dogs and 30 cats at any given time, plus varying numbers of donkeys, stray herds of cattle, goats, pigs and geese.”

Ferreira said the SPCA had only one vehicle, which serviced the entire area and they were desperate for another to meet the demand.

“The only money we get from the metro is for services rendered – picking up strays after hours – and these payments are often in arrears.” 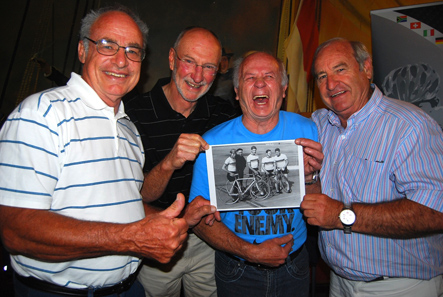 Martin Nefdt (far right) and his former Springbok team-mates (from left) Jack Lester, Johan Nicol and Willie Marx will be “cycling for the love of animals” at The Herald VW Cycle Tour in Port Elizabeth on February 2. Here they hold their team photo from the 1967 world track championships in Amsterdam.