The Herald VW Cycle Tour will offer something new for participants and spectators alike when the 106km Classic rolls out from Hobie Beach in Port Elizabeth on February 2.

Organisers have introduced the new Lake Farm climb in favour of the traditional 5K Hill, which will also be the site of a dedicated spectator zone.

Road race director Julie Briggs said the viewing point would bring the public much closer to the action and that the short, steep climb was one of the points on the route where the race could be decided.

“We would love to see the roads lined with spectators enjoying the atmosphere with their camping chairs and skottelbraais.

“We’ll also be giving away a fantastic lucky draw prize to one lucky spectator on the climb.”

Briggs said the public would be able to access the clearly marked spectator zone from Kragga Kamma Road.

The route over Lake Farm opens up the possibility of adding an additional element to the 2015 route, she said, but this will be confirmed at a later stage.

Briggs said her team from Mountain Events were excited to be handling South Africa’s second oldest national classic, after managing the mountain bike side of the tour for the past two years.

“Our aim over the next few years is to grow this event into one of South Africa’s leading cycling weekends and, by doing so, attract more out-of-town participants.”

Briggs said organisers were also upping the ante in terms of rider safety for the 2014 event.

“We designed the course so that there will be no dual traffic or crossing of riders on any road to ensure maximum rider safety.

“We will be increasing the number of marshals on the road, with the help of Achilles Running Club. The traffic department will also be assisting us again with rolling road closures.”

The feature race would once again be an official seeding event for the Cape Argus Pick n Pay Cycle Tour, she said.

“This is an excellent opportunity for riders to test their legs ahead of South Africa’s largest road race.

“We’ve set a route that is challenging for the pros but also caters for riders wanting to improve their seeding times.”

There will be a sprint prime on Buffelsfontein Road near Builders Warehouse and a King of the Mountains hotspot on Maitlands. The total elevation for the route is 1 100 metres.

Briggs said racing would be made more exciting with the additional element of the Ultimate Quest to play for. This category, which was introduced last year, is awarded to the male and female rider with the best combined time over the 80km Extreme mountain bike race and the 106km Classic.

“The mountain bike race should generate a time gap, which will make the road race extremely tactical,” she said.

The weekend festival of cycling culminates on the Sunday with the 55km Pursuit and 106km Classic road races.

Registration for all events takes place from 9am to 7pm on Friday, January 31, and between 9am and 3pm on Saturday, February 1, at The Boardwalk Convention Centre. No late registration will be available on the morning of the feature race. 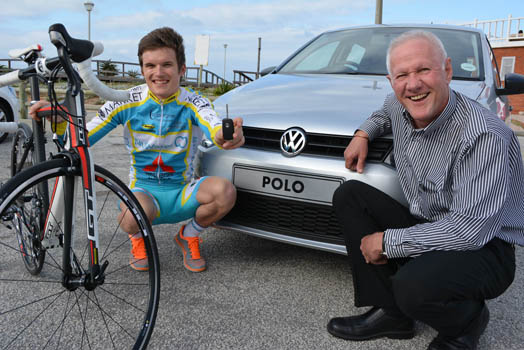 Port Elizabeth-based pro Clinton Barrow of NuWater-CTM (left) and Volkswagen Group South Africa’s Matt Gennrich look forward to the fun and excitement of The Herald VW Cycle Tour, which features a revised 106km Classic route and lucky draw prizes such as the VW Polo 1.4 Trendline and GT bicycles for participants.