The 2014 edition of The Herald VW Cycle Tour – the 29th in total – takes place in Port Elizabeth and Addo on February 1 and 2.

According to group communications general manager Matt Gennrich, the automotive manufacturer is proud to have been associated with the cycle tour for the past decade.

“This premier cycling event is the biggest in our region and thousands of participants from around the country eagerly await the next tour due to the scenic nature and challenge of the event.”

“Importantly, the organisation and running of the cycle tour is of the highest professional standard and, with our co-sponsors, we believe that this event is worthy of support.”

Also coming on board as a premium sponsor this year will be the Eastern Cape Parks and Tourism Agency.

“Additional information and manual entries will be available at local bike stores in Nelson Mandela Bay within the next few weeks.”

Peel said cyclists could once again look forward to the full complement of road and off-road distances, with the 106km Classic and 80km Extreme mountain bike challenge heading the line-up.

The Ultimate Quest category, which was introduced last year, would once again be on offer for those riders hoping to master both the road and mountain bike feature races, said Peel.

“The Ultimate Quest was extremely well received last year. It exceeded our expectations and we predict the 2014 event will attract just as much interest if not more.”

The male and female winners of this category will be rewarded for their exertions with R5 000 each in prize money.

With a total competitive prize purse of R115 000 and over R100 000 worth of lucky draw prizes – including GT bikes and home appliances from Tony’s Furniture, Appliances and Beds – the cycle tour remains one of the Eastern Cape’s richest cycling events.

In addition, one lucky participant will drive away in a brand-new VW Polo 1.4 Trendline after the prize giving.

Long-standing beneficiary Reach for a Dream, which assists children with life-threatening illnesses, will once again benefit from the proceeds of all the children’s and family rides.

The weekend cycling festival starts on the Saturday with the Powerade-sponsored family road races at Hobie Beach in PE and the mountain bike racing at Addo Polo Club.

On the Sunday, the action comes to a climax with the main road races. 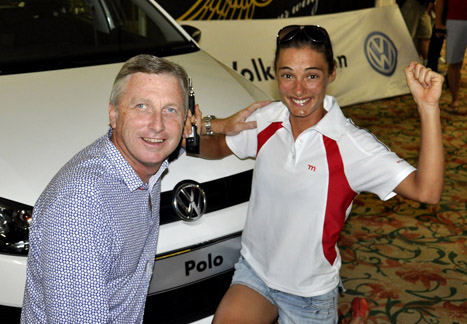