The Herald VW Cycle Tour’s return to Addo on February 1 is set to confirm this area’s status as the mountain biking capital of the Eastern Cape.

According to race director for mountain biking Brad Jackson, events like the tour had been responsible for a mini economic boom in the Zuurberg region over the past few years.

Jackson said the area offered some of the best and most diverse mountain bike riding in the province and landowners had begun to capitalise on the burgeoning sport.

“The owners of Hayterdale Trails, for example, are local farmers who have invested a huge amount of time, effort and money in training and employing local labourers to build and maintain the mountain bike trails throughout the year.

“These labourers have become so skilled at building proper mountain biking singletrack that they now need little to no supervision.”

Jackson said this was a win-win scenario for all as events like The Herald VW Cycle Tour, which traverses these trails, were able to keep people employed while growing the sport in the province.

He said participants in next year’s 80km Extreme event could look forward to some top-drawer singletrack, as well as newly built features like the Rabbit Hole, Corkscrew, Berm Lane and Zorr’s Rollercoaster, which were previewed at the cross country and downhill national championships in July.

“We had some phenomenal feedback from riders this year, so we’ve made very minor changes to all three routes.”

Because the feature race was extremely demanding physically with very challenging technical sections, Jackson said only skilled and fit mountain bikers should consider it.

He said it was compulsory riding for those who were up for the Ultimate Quest title, which required competitors to complete both the road and mountain bike feature races.

“For those who have reasonable fitness and medium skill levels, the 60km Adventure would be a better fit.”

“It’s fairly flat and easy, and anyone with a bit of fitness and technical ability could do it.”

For the little ones, the 5km Kiddies’ Challenge and 500m Toddlers’ Dash, also sponsored by Powerade, round out the racing programme.

Participants could look forward to riding through citrus orchards, past canals and on singletrack, jeep track and district roads, said Jackson.

“One of the major highlights on all routes, including the 5km event, will be riding through the packing sheds of the Sundays River Citrus Company.”

He said riders in the 80km could also look forward to some wildlife spotting as they pass alongside the Addo Elephant National Park.

Jackson said participants were advised to come prepared for the harsh conditions of the Addo region, with plenty of fluids, sunscreen and sealant for their tyres.

Back at the start/finish venue at the Addo Polo Club, he said there would be food and refreshments on sale, as well as children’s entertainment.

Registration for the mountain bike races takes place on the Friday only at The Boardwalk Convention Centre in Port Elizabeth, while late registration is in Addo on the morning of the race.

A steak braai, pub and camping facilities will be available at the Addo Polo Club on the Friday evening. Participants are advised to book their place on the race website. 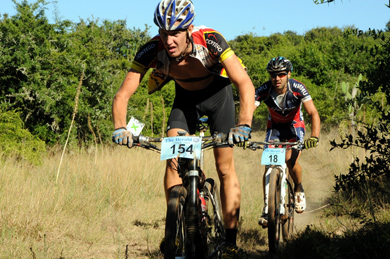