According to organiser Craig Wapnick, small, lightweight riders have always dominated the sport of cycling.

“It’s almost impossible for someone weighing more than 90kg to compete for overall victory in multiday cycling races – at any level. In marathon and cross country mountain biking the same general rule applies.”

Wapnick said this bias alienated a significant number of larger riders who were physically in peak condition but simply could not match their slighter counterparts on the climbs.

“What about those guys who love mountain biking, are as strong as a buffalo but just too heavy? What do they have to aim at?”

With this in mind, he said the organisers of the Old Mutual joBerg2c had embraced an exciting new category initiated by TREAD magazine, South Africa’s leading mountain bike publication.

“The category will be known as the TREAD Buffalo category,” said Wapnick.

He said the nine-day mountain bike race would be the first event to officially launch the category, with other stage races expected to follow suit.

Wapnick said men and women would be able to register for the category and view their results for different events on the TREAD website.

“There will be a TREAD Buffalo ranking, with a heavyweight party at the end of next year to give the big boys recognition.

“There will also be an official weigh-in before our event, just in case the delicious food served in the race villages makes the category and riders expand.” 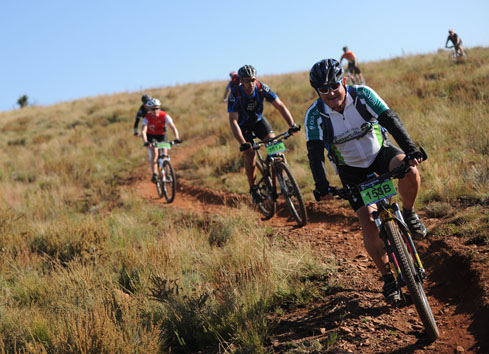