UJ’s Cheyna Tucker, the country’s top student player, gives readers a drill down into the fast-paced and often feared sport of squash.

Often intimidatingly referred to as “jet-propelled chess”, squash offers one of the best full-body workouts around.

Rated by a 2003 Forbes magazine survey as the number one healthiest sport to play, the high-speed game is practised by some 20 million people on more than 50 000 courts worldwide.

According to South Africa’s top female student player Cheyna Tucker, who currently occupies the 78th spot in the world rankings, the sport is ideally suited to someone with limited time who is looking for an intense workout.

“Due to its intensity, much is gained in a little time,” says Cheyna.

“And, as an indoor sport, it’s easy to get a good workout year-round without having to brave the dark, cold or wet weather.”

Cheyna says continuous energy demands are being made of the muscles throughout a rally, game and match, with very little recovery time.

“It develops the power and strength of muscles, especially in the arms and legs, and provides a great upper and lower body workout – you use your legs to run around the court and your arms and torso to twist the body and swing the racquet.”

She says the key physical benefits include improved aerobic fitness, with more oxygen circulated throughout the body for better heart, lung and muscular endurance.

“Squash boosts your cardiovascular fitness, allowing more oxygen to pump through your body and energise your muscles.”

Due to the fast-paced nature of the movement and the stretching range-of-motion demands, it boosts flexibility, sprint speed and hand-eye coordination.

The second-year sports psychology student at the University of Johannesburg says squash also has great benefits for improved concentration and mental strength.

“Matches often last for some time and demand focus and patience throughout.

“It’s very important to develop mental skills such as concentration, motivation, confidence, anxiety control and relaxation, as these are all essential for producing effective performances every time you step onto the court.”

Cheyna says professional players must pay as much attention to the mental aspects as their other skills.

“Areas that need development must be identified right from the start.

“For example, you may be very confident but lack concentration and motivation. Or you may be well motivated but find it difficult to relax in pressure situations.”

She says working with a coach or mentor to devise a mental skills training programme can help in this regard.

Players also need to continually work on the technical, tactical and physical aspects of their game.

The technical aspect includes analysing and improving the biomechanical elements of a player’s movement and swing, while the tactical part means understanding how to win rallies, and create and hit into space.

As with any demanding sport, the physical component involves working on speed, agility, aerobic and anaerobic fitness, as well as flexibility, strength and core stability.

Cheyna trains between 16 and 20 hours per week.

“I play practice matches against guys every week to get some tough matches in and am continuously participating in local and international tournaments.”

But, says the former U19 and U23 national champion, beginners need not fear picking up a racquet.

“It’s a very hard sport on the body and it takes a fair amount of time to get properly fit for squash, but initially you can start practising your shots and slowly building your fitness on the court as well as off.

“As it is high impact, you will initially feel very stiff in all parts of your body.”

Cheyna advises beginners to take lessons with a professional to get the technical aspects of the game right from the start.

“Once bad habits are formed, they’re very difficult to change.

“It’s also advisable to join a social league at your local club and play while you receive lessons and work on your fitness – this gets you familiar with the scoring, the rules and the game itself.”

The globally used scoring system is based on one point per rally won, with games being played to 11 points or, in some instances, 15.

“A match is the ‘best of five’; in other words, the first player to reach three games.”

She says drills play a crucial part in improving the technical aspects of your game. These repetitive routines are practised on-court with one or more partners and are designed to work on specific areas, such as footwork, movement, racquet skills and fitness.

“All drills will improve the way in which you stroke the ball. One must invest a certain amount of time in doing drills to improve the overall level of your game.”

“Because of the unnatural stance of the body during a squash game, the most common injuries would be to muscles, tendons and ligaments.

“Achilles tendonitis is very common and there are many reported cases of complete ruptures where surgery is required to repair the tendon.

“Many players strain or damage their rotator cuffs from incorrect handling of the racquet or get tennis elbow due to hitting the ball incorrectly.

“Other injuries that can occur are twisted and sprained ankles, pulling of back muscles and tearing of calf or groin muscles.”

Cheyna herself has recently come back from a calf injury and is steadily working her way back to the top of her game after being part of the winning mixed and women’s teams at the national doubles championships in April.

But as much as squash demands in terms of mental and physical effort, the returns it offers in terms of all-round fitness are fantastic. So if you’re looking for a great cross-training alternative as summer approaches, give it a try at a gym or club near you. 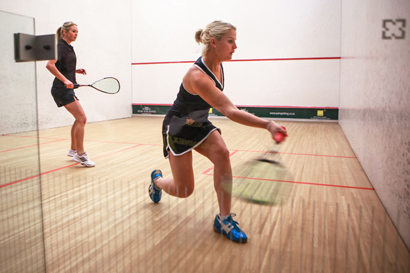