One hundred mobility-impaired Nelson Mandela Bay residents received brand-new wheelchairs at the official handover ceremony for the SPAR Wheelchair Wednesday initiative, which took place at the NMB Stadium on Wednesday.

Speaking at the event, the Association for Persons with Disabilities (APD) chairman Garth van Niekerk reminded the assembled guests what the wheelchairs meant to their recipients.

“Don’t feel sorry for these people. They are not stuck in wheelchairs – they are stuck without them,” he said.

SPAR Eastern Cape marketing manager Abri Swart said the retail chain had jumped at the opportunity to assume the title sponsorship for such a worthy cause this year.

With some 75 000 metro residents classified as “disabled”, Swart said they formed a significant part of the retailer’s customer base.

“Our involvement in this initiative has really opened our eyes to the needs of people with disabilities. SPAR Eastern Cape continually strives to improve their shopping experience in each of our stores.”

In addition to the wheelchairs, which were supplied by the Wheelchair Foundation in the United States, the five-week fundraising and awareness campaign also grossed over R400 000 for the APD in the metro.

According to the association’s executive director Brian Bezuidenhout, the proceeds would be channelled towards the operating costs of the organisation’s training and job creation workshops.

Bezuidenhout said they employed 130 people with disabilities, teaching them marketable skills such as sewing, embroidery and screen-printing.

The APD workshops also handled a number of corporate contracts, such as the upholstery work for a local bus company, as well as the production of corporate clothing and uniforms for various schools, he said.

Now in its second year, the SPAR Wheelchair Wednesday initiative saw almost 200 able-bodied participants experiencing the accessibility challenges that people in wheelchairs face in going about their daily business.

Every Wednesday throughout May, representatives of participating companies spent four hours in a wheelchair, with their corporate employers donating funds for the privilege of doing so. 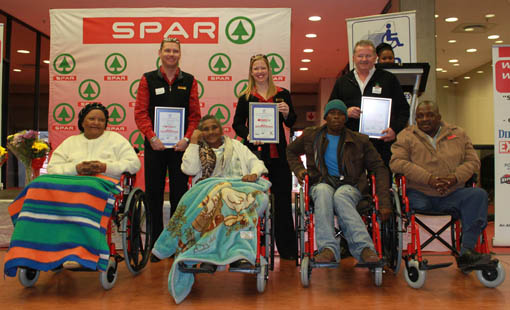