Sapiro, who won the 100m backstroke gold in the S10 category in Beijing five years ago, repeated her triumph over the same distance in 1:11.93 at the Wingate Institute of Sport in Netanya on July 24.

She added to her Maccabiah silverware with second place in both the 50m and 100m freestyle events.

It was the first time that the international Games, which are commonly referred to as “the Jewish Olympics”, included an official Paralympic component.

Sapiro, who has severe muscle dysfunction on the left side of her body following a water-skiing accident nine years ago, said it was a significant step in the development of sport for people with disabilities.

“It’s amazing for development in disabled sport, for Israel and the Jewish moment. I feel so lucky to be a part of it.”

The Krugersdorp resident proved she was more than a match for the able-bodied swimmers at the previous Games in 2009, when she competed in the open category.

She claimed silver in the 100m backstroke and was also part of SA’s bronze medal-winning relay team.

“I swim against anyone. I see myself as a swimmer and an athlete – who I compete against isn’t that important,” said Sapiro.

“What matters most to me is if it challenges me and makes me a better swimmer.”

The 22-year-old said the Games had been an important part of her final preparations for the IPC World Swimming Championships, which start in Montreal, Canada, on August 12.

“I was really happy with my performances because I now feel like I’m on track for worlds.”

Sapiro has been on good form since the London Olympics last year, where she took third place in her signature backstroke event. She said her Paralympic medals had definitely been the highlights of her career to date.

“There’s no better feeling than being able to stand on a Paralympic podium and seeing the South African flag being raised.”

The first-year journalism student said juggling her full-time studies and training schedule was certainly challenging but that she was determined to work hard and succeed in all areas.

“UJ has been amazing with physio and gym programmes, and in assisting me with my studies. It’s been great working with everyone at the university – they really help me where I need it.”

She said her career goal was to become a journalist and make a difference in disabled sport.

“I believe I will be able to touch many lives through the media. I also want to swim at one more Paralympics – then it’s time to live life outside the world of swimming.” 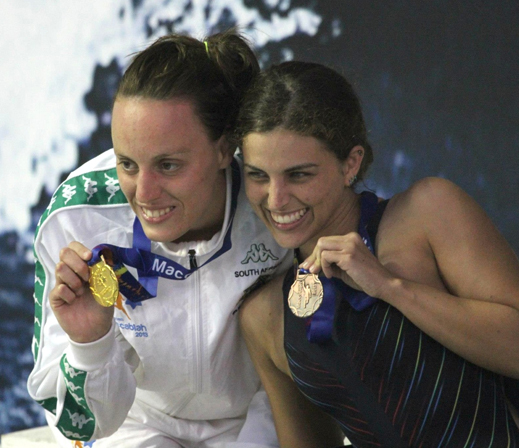