Organisers have allocated an additional 500 slots as the deadline for the 30th Bestmed Jock Cycle Classique looms at midnight on Tuesday, July 9.

“We’ll certainly have a full field of 1 500 riders and, thanks to a special concession from the Mbombela traffic department, we’re now able to accommodate more,” said race director Wynand de Villiers.

He said the Jock was billed as South Africa’s toughest one-day road race and would be headed by the country’s top pro teams.

“The entry response has been outstanding despite us having to deviate from the traditional route between Barberton, Nelspruit and Kaapmuiden due to roadworks.”

The Mpumalanga event, which is presented by ASG, will this year follow a three-stage route from Nelspruit to Sabie, White River and back to Nelspruit on July 20.

De Villiers said it was a once-off opportunity for participants to experience this particular route, which features the challenging Long Tom Pass, as organisers would most likely revert to the old one next year.

“The traditional Jock route represents the pinnacle of road cycling in South Africa and it’s an icon not to be tampered with.”

But, he warned, the new 151km route would be just as tough as previous editions. “When you ride your bike anywhere in the Lowveld you either go up or down; the road is never flat.

“The first two stages will be similar in difficulty, but the final one is a real leg breaker with Long Tom.

“I know a lot of riders are of the opinion that it won’t be as difficult as the traditional third stage because Long Tom is right at the start. But it’s eight kilometres long and keeps climbing after the left turn to Nelspruit.”

De Villiers said it would take the slower riders more than an hour to get to the top. “That equates to a lot of energy and pain – and then there is still a long way to go.

“The last 50km are predominantly downhill, but there are a few bumps in the road and these will really add insult to injury after Long Tom.”

In the absence of the infamous Boulders and Hilltop ascents, he said the pass would uphold the race’s reputation for iconic climbs.

“We have a saying that ‘with every Jock medal worn, again a cyclist is born’.

“Only those who have completed the journey know the boundaries that your mind and body have to push.”

The race starts and finishes at the Mbombela Stadium near Nelspruit.

“Besides ample parking, wonderful staff and security control, there will be a big race village where SAB will present a beer garden and Mpower FM will broadcast live throughout the day.”

He said a team of three emcees, led by the voice of South African cycling Johnny Koen, would keep the public informed at all three start and finish venues.

De Villiers advised the public to avoid the roads around the stadium from 5am to 8am and again from 2pm onwards. 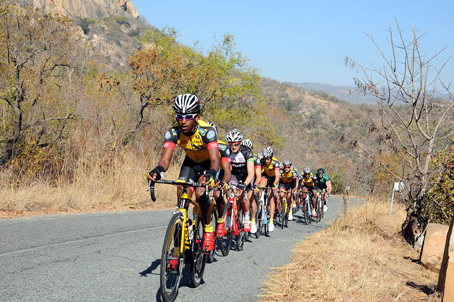 Eritrean Meron Russom of Team MTN-Qhubeka leads the charge up a climb during last year’s Bestmed Jock Cycle Classique, presented by ASG. Entries for the 30th edition close at midnight on Tuesday, July 9.