Fresh from his success at the Old Mutual joBerg2c, Olympic gold medallist Matthew Brittain is set to be more than just a celebrity guest at the three-day RE:CM Knysna 200 mountain bike race next month.

Brittain, who finished sixth overall alongside Rob Dormehl in the nine-day event, will once again team up with his fellow rower to take on the Garden Route race from June 7.

The 26-year-old oarsman said he hoped his recent achievements on the bike meant that he would be taken seriously in the competitive stakes.

“I would way rather be a racing snake than a celebrity guest! When I go slowly ‘for the fun of it’ I don’t really enjoy myself; to me it’s more fun to race a bit and go for it.”

This year, he also notched up a 27th place finish in the Absa Cape Epic with Olympic team-mate James Thompson.

Brittain said the Knysna race would be an interesting test, as he had only participated in the longer stage races.

“I would guess the shorter distance would suit me better but I don’t have the experience to really know where I stand relative to the competition.

“I know the terrain down there is incredibly steep so I will be bringing a granny gear and expect the legs to feel like they have done double the distance!”

The Centurion resident said he was looking forward to riding the 200km route in and around the Knysna forest.

“It will probably be muddy but the route will be spectacular with fantastic riding because it’s in the most beautiful part of our country and renowned for phenomenal trails.”

He said Sedgefield farmer and trail builder Dormehl’s knowledge of the area could give their team a slight advantage.

“This is Rob’s backyard and I couldn’t wish for a better partner to hit the hills down there with.

“But a little knowledge is dangerous as it can lead us to focus on the wrong things. No amount of local knowledge will help us if we can’t compete physically in the actual race, so that’s where 99% of our attention must go.”

Brittain said riding with Dormehl, who also represented South Africa in the lightweight fours a decade ago, was fantastic as he was equally determined and focused on the racing aspect.

“I was very surprised when I was actually the stronger team member at joBerg2c, as he killed me when I first rode with him this year. I think it was even more surprising for him as he’s used to being the one who waits at the hilltops!”

He said they would definitely be racing for a podium finish in the Knysna event.

“I hate it when people say they are there to race and then content themselves with finishing in their comfort zones.

“Winning is not always realistic, so I focus rather on racing as hard as I can and accepting whatever result that gives me. This allows me to evaluate my performance objectively against my own standards and not relative to my position.

“Sometimes a poor race will give you a win, but it’s still a sub-par performance that needs to be addressed to get the most out of myself.”

The duo, who will be racing as Team RE:CM Rowers, will face stiff competition from the title sponsor’s pro riders Waylon Woolcock and Lourens Luus, who placed second at joBerg2c. Kevin Evans of FedGroup-Itec, who won the solo category, will also be among the big names.

“The competition always terrifies me no matter who they are. To me they always look fit, strong, fast and intimidating. So I don’t look!

“Nevertheless, it’s an enormous honour for me to start alongside such fast and experienced opposition. But it’s still a race and if you put them on a pedestal they have already won half the battle before the race has even started.”

Brittain said riding had helped to maintain his fitness levels this season while he recovers from a lingering back injury.

“I’m not in any pain at the moment. If all goes well, I will start rehab in September alongside the cycling and get back into the boat in January.”

To enter the race, visit www.recmknysna200.co.za 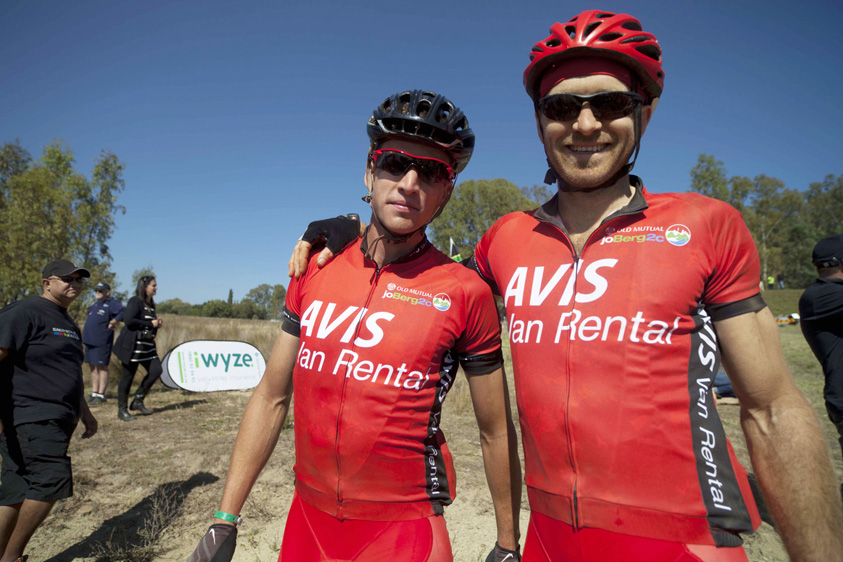