Riders looking for a place at this year’s FedGroup Berg & Bush mountain bike race will have one last chance when the final call for online entries takes place at 10am on Monday, June 3.

According to organiser Gary Green, the eighth edition of the stage race, which rolls through KwaZulu-Natal in October, is almost fully subscribed with just a few slots still available.

“All the events will close as soon as they are full,” said Green.

He said Monday would be the only opportunity for riders to get an entry for the three-day Descent and Great Trek events, as well as the original two-dayer.

“So you must get on the waiting list before Monday. It’s first come, first served on the day, so whoever logs on quickly and pays at the correct time will get in.”

Successful entrants’ status will change on the website once their entry payment has been confirmed, he said.

Unlike the other two team-based events, the Great Trek would also offer a solo category, said Green.

“We added the Great Trek last year due to popular demand. It’s an exclusive mid-week event aimed at riders who prefer to ride in a smaller field and enjoy the luxury of individual tents.”

The FedGroup Berg & Bush starts with the 228km Descent for professional and competitive riders on October 11, with the more intimate Great Trek field tracing a similar 205km route four days later. The event wraps up with the 110km two-day race from October 19.

“There have been some major route changes this year to avoid tar roads as much as possible,” said Green. “We are always improving and adding innovations to cater for the true mountain biking enthusiast.”

The Descent and Great Trek start in the Northern Drakensberg near Sterkfontein Dam in the Free State.

Unlike previous years, Emseni Camp on the banks of the Tugela River in the Central Berg will be the finishing venue for all three days.

The race village forms the focal point of the clover route, which includes such highlights as a spectacular drop off the Drakensberg escarpment and the steep climb over the historical Anglo-Boer War battlefield of Spioenkop.

Last year’s Descent was won by defending champion Brandon Stewart and team-mate Neil MacDonald, riding in the colours of the title sponsor. 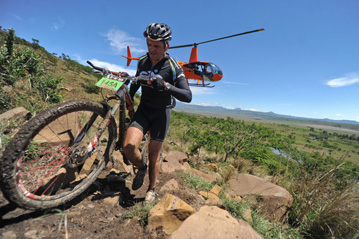