South Africa’s toughest one-day race, the BESTmed Jock Cycle Classique will take a detour onto a brand-new route for its 30th edition on July 20.

The three-stage national classic, which is presented by ASG, traditionally takes place on a triangular route between Barberton, Kaapmuiden and Nelspruit in Mpumalanga. But this year it has been diverted for that most mundane of reasons – roadworks.

“The route changes are due to roadworks on the N4 toll route in the area of Mara Valley and the Gorge,” says route director Egbert de Bruyn.

“There are stop/go controls there and the route over Boulders is the alternative route, so the concessionaire (TRAC) would not give us permission to use that road at all.”

De Bruyn says having to work around these obstructions has essentially resulted in a whole new race.

“Everything changes – from start and stop-over points, to new waterpoints. And where Barberton used to be the main focal point of the race, we are not even going to pass through it this year.

“The race will now centre on Nelspruit.”

This means that the infamous Hilltop and Boulders climbs, which have been the undoing of many a roadie, are now conspicuous by their absence.

But, says De Bruyn, the new course still offers riders a leg-numbing, heart-racing 151km challenge in the heart of winter.

“As everybody knows, the Jock is the toughest one-dayer in the country and this new route has some fresh challenges of its own.”

The 43km first stage starts from the Mbombela Stadium near Nelspruit at 6.30am and features 20km of hard pedalling on gradients of between two and six percent.

“Then we have the extremely challenging Heidel Eggs climb. At two kilometres long, it’s shorter than Hilltop but more or less the same ascent.”

The stage terminates along the White River Road with breakfast at the Rob Ferreira School.

At 9am, the 45km second stage heads out in the direction of Sabie over the 7km Spitskop climb, which is the same length as Boulders. For those who make it over the top, a welcome lunch break awaits at Sabie Primary School.

“Although stage two is shorter than the second stage last year, the first 15 kilometres is over rolling hills as opposed to the previous flat roads,” says De Bruyn.

After lunch, at around 12.30pm, the 63km final stage sees riders return to Nelspruit via Long Tom Pass.

“The last stage begins with 10 kilometres of tough climbing up the pass that will drain riders’ energy right from the start.”

It is mostly downhill after that but, he says, the legs will have to last 18km longer than the previous year.

With 20 lead-out vehicles plus motorcyclists and traffic officials on hand, De Bruyn says the one thing riders do not have to worry about is their safety.

“Many races, like the national champs and Panorama Tour, are held annually on these routes and the motorists in this area are much more relaxed and forgiving.”

According to race organiser Wynand de Villiers, the field will be limited to 1 500 participants.

“The nature of the riding terrain in the Lowveld is such that no cycling event is going to be easy – the road either goes up or down! So this year’s Jock will be as tough, if not tougher than previous years.”

In the absence of reigning champion Reinardt Janse van Rensburg, a new crop of pros will compete to take the title of toughest rider.

“I think the MTN-Qhubeka feeder team will be the ones to beat this year,” says De Villiers.

“They have shown themselves to be a complete outfit by winning the team time-trial at the SA champs and their African riders are very good climbers.”

He says riders who would like to do two stages will join the tour in White River, while those wishing to complete just one leg will start with the final lot in Sabie.

He says the 5.30pm cut-off time will be strictly enforced on the last stage.

“Riders can’t think that they can tackle the Jock without training. It’s a tough ride in anyone’s terms – if you don’t train, you won’t make it.” 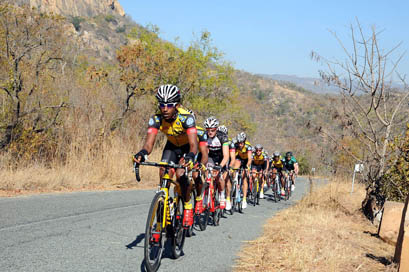 An MTN-Qhubeka rider leads the bunch up a climb in last year’s Bestmed Jock Cycle Classique.