With five wins from six starts, defending champion Kevin Evans will be a marked man when the three-day Nedbank sani2c mountain bike race rolls out of Underberg in KwaZulu-Natal on Thursday.

Evans, who is slowly returning to form following complications from abdominal surgery, is set to mount his title defence in the 271km Race alongside ad hoc partner Gawie Combrinck.

“I think we have a great chance at a podium but the racing will be very close this year,” said 34-year-old Evans.

“One small mistake could cost you the race and, if we’re smart, being in the right place at the right time could be the difference between a podium and a win.”

He said Combrinck, 27, was currently on good form and well rested after missing the joBerg2c due to Bell’s illness. Evans himself took the laurels in the solo category at the nine-day event.

“I could see Gawie’s form at the Mzansi Tour where he rode on the national squad alongside Robert Hunter. It was then that we chatted about sani2c.

“I think he will be the stronger rider for sure at this stage in our partnership. Makes me nervous!”

Evans said he was still rebuilding his form after battling with a recurring abscess following an appendectomy two years ago.

“It was a surgical problem but fortunately some good doctors finally got to the bottom of it this year. The form is improving slowly, bearing in mind that I’ve only been back on the bike for six weeks.”

“I’m not sure what it is with sani2c, but it’s a great record. I think half the winning factor can be attributed to the race, in which I just really have fun.

“The route is great, the scenery and organisation is fantastic. It’s hard not to enjoy myself and, when I do, the results come.”

The Race finishes at Scottburgh on the South Coast on May 18.

The world’s largest mountain bike stage race is presented by Nedbank Private Wealth and comprises the Trail (May 14 to 16), Adventure (May 15 to 17) and Race (May 16 to 18) segments. 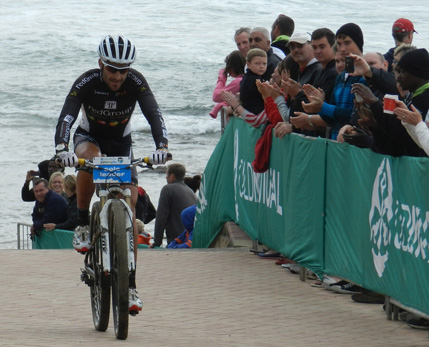 Kevin Evans, shown here winning the solo category at the Old Mutual joBerg2c, will return to defend his title in the three-day Nedbank sani2c mountain bike race from Thursday.