University of Johannesburg student Jeromy Andreas has stepped out of obscurity into the spotlight after winning the national elite 10km road title last week.

The track specialist said he surprised even himself when he beat seasoned roadrunners to the title in Durban last Sunday.

“I just went there to run for fun as part of the USSA (national student) team. It wasn’t my intention to win at all,” said the 21-year-old, who has already qualified for the world university championships in Russia in July.

But when he saw the pace in the closing kilometre, the U23 national 1 500m champion said he knew he could take the win.

“On track we run much faster and finish much stronger. So when I saw what these road guys were doing with a kilometre to go, I knew there was no way they would outsprint me.”

The second-year transport management student, who has a personal best of 3:48 over 1 500m, turned on the afterburners and sprinted the last 500 metres to claim his first senior national title in 29:03, after winning the junior section three years ago.

Andreas said the victory had now thrust him into the spotlight. “People are now asking, ‘Who’s Jeromy and where does he come from?'”

Among them is former 10 000m Olympic silver medallist Elana Meyer, who is hosting a camp for young athletes who show potential for the Rio Olympics in 2016.

Andreas, who will take part in the 1 500m and 5 000m races in Russia, said he was working up to the longer distances.

“If you go for the longer distances too soon, you can mess your whole career up.

“I’m focusing on track for now. But by the age of 25 or 26 I’d preferably move onto the road and try to improve my times there.”

He said road running presented a fresh tactical challenge for him.

“On track we just run fast and qualify. But on road you must wait and have patience and analyse your race very carefully.”

Although he has been likened to 10 000m record holder Hendrick Ramaala and the late Beijing Marathon winner Ian Syster, Andreas is unfazed by the comparison.

“I can do more, I’m unique in God’s eyes. We’re all different, so I can work hard and reach for higher goals.”

And work hard he does, getting up to train at 5am every morning, then attending lectures before wrapping up the day with an evening training session.

“It gets hectic. I usually also race on Saturdays and then I have time for friends and family.

“But I want to get a masters or doctoral degree and then I want to focus my energy on becoming a world-class athlete. But right now my studies are my first priority.”

The Northcliff resident, who is one of the university’s high performance athletes, says one of this season’s highlights was winning the 3 000m (8:10.87) in the Varsity Athletics series in front of his home crowd at the UJ Stadium last month.

“That night was so special – everyone recognised me.”

Andreas has come a long way from the untrained Eersterivier (in Cape Town) schoolboy who simply fell into the sport through an interhouse athletics meet.

“The running bug bit me and I started to get more and more interested in the sport. I don’t know how it’s gone as far as it has!

“I can’t just sit back now, I have to use this talent that I got from God. So for now I’m just going to train, train, train and prepare for bigger things.” 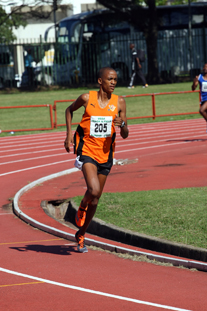