After the course record was broken in the opening leg, teams in the Investec Night Relay series will be aiming to set the bar even higher when the starter pistol fires for the second race in Port Elizabeth on Thursday evening.

According to organiser Michael Zoetmulder of Zports Event Management there had been a marked increase in interest and entries following the success of round one.

“There are a number of corporate teams who are keen to give defending champions Gamble Pharmacy a run for their money,” said Zoetmulder.

Last month, the 2012 winners set a record time of 1:04:56 for the 21km relay with the help of Uitenhage-born Olympic marathon runner Lusapho April.

Zoetmulder said he had definitely noticed a growth in the number of running teams, with the field now split 60:40 between runners and walkers.

“Although we have a strong competitive element, most of the teams are social athletes who are out to have fun.”

Investec Specialist Bank regional manager Cumesh Moodliar said Investec had eight teams taking part, and that they were looking forward to the next event.

“We all thoroughly enjoyed the friendly rivalry and festival atmosphere of the event in March. The relay is a perfect opportunity for our staff and their families to get together socially.

“We encourage our colleagues in the PE business community to take up the challenge and join us.”

Runners complete five 4.2km laps around the North End Lake, while the walkers do three.

Zoetmulder said there would be floating trophies and gold medals for the category winners. “Plus there are great lucky draw prizes for everyone, including a thousand rand cash.”
With its live music and a Castle Lite beer garden, he said the event was the perfect opportunity to reconnect with workmates socially and get away from the stresses of work.

“At the same time, you’re also doing good as all proceeds from the beer garden go to the Rotary Club of PE Sunrise.”

Zoetmulder said the lake, which is situated in the Nelson Mandela Bay Stadium precinct, was one of the untapped sports venues in the city.

“With the stadium as a dramatic backdrop, the Investec Night Relay really highlights the great work being done by the Mandela Bay Development Agency in the ongoing renewal of the Sydenham area.”

Zoetmulder said all new teams would be required to register online before Thursday morning.

“Teams that took part in round one don’t need to re-register. They will keep their series number and just pay the entry fee ahead of round two to indicate that they will be taking part.”

Late entries will be accepted at registration, which takes place from 4.30pm on the day, at an additional cost of R50 per team. Racing starts at 6pm.

The final race of the series takes place on May 2.

For more information or to register, visit www.investecnightrelay.co.za. Alternatively, stay up to date at www.facebook.com/businessrelay. 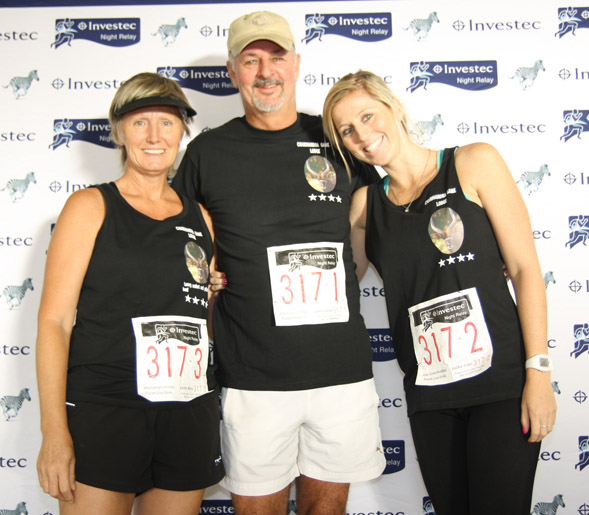 Mom Rose, dad Phil and daughter Tammy Rawstron will be lining up for the second of the Investec Night Relay series events on Thursday, April 4, after winning the walking category at the first race in a record time. Photo: Zports