Due to the on-going redevelopment of the Kings Beach car park by the Mandela Bay Development Agency, the SPAR Women’s Challenge will be moving to a more spacious venue at Pollok Beach in Port Elizabeth.

After fielding more than 12 000 participants last year, organisers of the Eastern Cape’s biggest road race are expecting a surge in entries for the 20th anniversary edition on May 4.

Although the old venue had been large enough, Swart said the building work on site had impacted on the previous event.

“The construction work began after we were well into our planning and it was too late to change venues. However, the developers held back certain areas of development to accommodate our race as much as possible.”

He said they were grateful for the municipality’s continued co-operation and involvement in the event. “They have supported and advised us throughout the planning stages.”

According to Swart, the grass area at Pollok Beach would be large enough to allow for a much wider medal and drinks table at the finish, thereby eliminating any possible congestion.

“With three times the area now available to us, the 5km and 10km races will also each have their own finish area.”

He said the change of venue had also necessitated alterations to the course.

“Both races will start in Marine Drive between 8th and 9th Avenue, with participants then proceeding to Admiralty Way.”

While the 10km runners take a short loop through the streets of Summerstrand before heading along Strandfontein Road and La Roche Drive back to the finish, the 5km participants will return via 10th Avenue.

To ensure that the high volumes of social walkers and runners are kept separate from the serious athletes, the 10km race will start at 7.30am and the 5km at 8am.

Swart said Marine Drive would be closed from 6.30am to 9.30am between 6th and 10th Avenue.

Enter at www.spar.co.za or collect a form from any SUPERSPAR, SPAR or KWIKSPAR. Entry forms are also available from selected sports shops in Nelson Mandela Bay.

Late entries will be taken during registration at the venue from May 1 to 3 (9am to 7pm) and on the morning of the race. 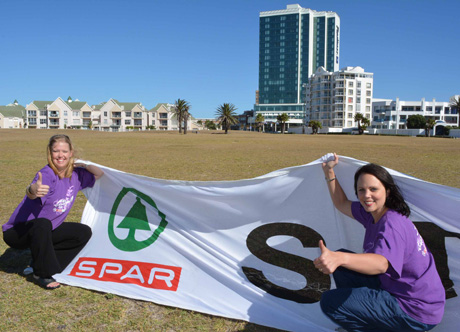