Finishers of the Emperors Palace Classic in Johannesburg will once again be treated to shoulder-to-shoulder racing when the Circuit Spectacular kermesse takes place after the road race on Sunday, April 14.

According to organiser Wynand de Villiers, from ASG, many national Classics presented post-race kermesses as part of the entertainment in the past, but the focus on mass participation has seen this invitation-only event dwindle.

“For us it’s a no-brainer. It is such an exciting event and the venue lends itself perfectly to this type of racing.”

He said the top finishers in the 104km feature race would be invited to take part in the circuit race that took place within the confines of the resort.

The kermesse typically lasts 45 minutes plus one lap and offered a handsome prize purse of R10 000, said De Villiers. In addition, riders could help themselves to cash prizes ranging between R500 and R1 000 at each of the three hotspots.

“It is a great value-add for our participants and spectators,” said de Villiers.

The sixth edition of the Emperors Palace Classic has been moved from its traditional slot in February to autumn to present riders with an opportunity to participate in a Classic at a less congested part of the season.

“February has just become too crowded,” he said.

De Villiers said the new date was designed to attract riders who had trained for the Cape Argus Pick n Pay Cycle Tour and still had some residual fitness in their legs.

“It’s perfectly positioned for those who want to keep the legs moving.”

He described the route as “fast and flat” and it offered sprinters something to sink their teeth into. A single climb made its appearance at the halfway mark, but he said the incline won’t do much to slow the pace.

Reinhardt Janse van Rensburg, who is currently racing for Argos-Shimano in Europe, took the win last year and De Villiers speculated that a rider like Herman Fouche would be hard to beat in 2013.

“He definitely has all eyes on him after his performance at the Cape Argus.”

The 50km option takes riders along the same route as the feature event, but will see them returning home upon reaching Carnival City.

The mountain bike races, which feature distances of 20km and 40km, have something very special in store.

“About 90% of the route is on the grounds of the OR Tambo International Airport,” said De Villiers. “Normally you’d need special security clearance to go there.

“The thrill is that riders will literally be able to feel the thrust of the aeroplanes as they’re taking off.”

The weekend cycling festival also features races for children from the ages of two to four and five to eight.

“Emperor’s Palace is a superb venue,” said De Villiers. “Whether they are cycling or tapping into any of the other entertainment, we know guests will be well looked after.”

Enter online at www.cyclelab.com before April 2. 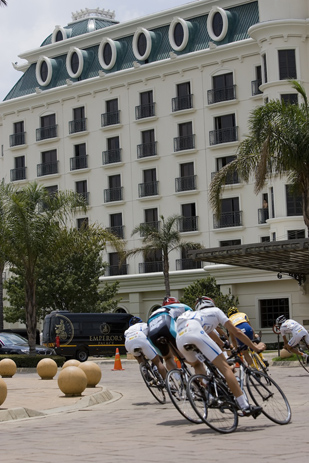 Some of South Africa’s top road cycling teams will thrill spectators with shoulder-to-shoulder racing in the Circuit Spectacular kermesse during the Emperors Palace Classic on April 14. Photo: Wayne Hayward