Following a date change from February to April 13 and 14, the Emperors Palace Classic, presented by ASG, is set for a big stop-over on South Africa’s autumn road racing calendar.

According to event director Wynand de Villiers the weekend festival of cycling, which takes place in and around the Johannesburg casino resort, was moved to keep riders on their bicycles a little longer before the winter cold set in.

“The event was shifted to April to extend the racing available in autumn. Most guys will have done the Cape Argus Pick n Pay Cycle Tour and this gives them something else to train for while they still have that residual fitness.”

With three big races in February alone, including the Dis-Chem Ride for Sight and Macsteel Carnival City Classic, De Villiers said the provincial calendar had simply become too crowded.

“It was virtually impossible to race all three, even if you wanted to. We felt we needed to move this race for it to stand alone and allow more riders the chance to take part.”

He said the change has already had a positive effect on the flow of entries, with some 6 000 participants anticipated across the mountain bike events on the Saturday and the road and kiddies’ races on the Sunday.

“We’ve fine-tuned the event over the last six years, so it offers something for everyone.”

As in previous years, De Villiers said he expected the top professional teams to turn out for the 97km road race.

“The route is relatively unchanged and will be fast, flat and exciting. For the social riders, it’s ideal for getting the legs moving after Argus.”

With defending champion Reinardt Janse van Rensburg currently racing in Europe for Dutch team Argos-Shimano, the way is clear for a new winner.

De Villiers said the course, which features a single climb just before the halfway mark, would once again favour a sprinter. “Someone like Herman Fouché of Bonitas, who recently won the Argus, would be a big favourite.”

In keeping with tradition, he said the road race would be followed by an invitation-only kermesse featuring the top professionals.

“The Circuit Spectacular around the central fountain is always a highlight for spectators.

“The kermesse has largely been abandoned by the other Classics and ours is possibly the only one remaining countrywide.”

On the mountain biking side riders had 20km and 40km options, said De Villiers. He said about 90% of the routes traversed the grounds of OR Tambo International Airport.

“We’ve been granted special access and participants will be riding just 50 metres from the runways at some points. They’ll be able to feel the thrust and power of the jet engines as they’re about to take off.”

De Villiers said the kiddies’ races, for ages two to four and five to eight respectively, had also become immensely popular. “Emperors Palace is an amazing, one-stop venue, so there’s plenty to keep the whole family entertained for the entire weekend.”

Enter online at www.cyclelab.com before April 2. 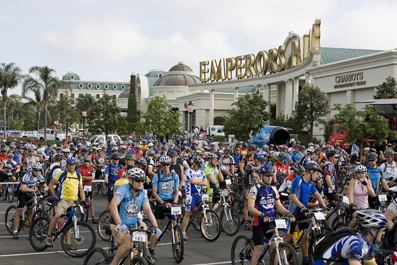 Participants in this year’s Emperors Palace Classic, presented by ASG, will line up a little later in the season following a date change from February to April 13 and 14. Photo: Wayne Hayward