The East African climbers came to the fore on the queen stage of the Bestmed Tour de Boland, presented by ASG, in the Cape Winelands on Thursday.

It was the third stage victory for the Potchefstroom-based team, placing control of the tour firmly in their hands.

Australian Nicolas Dougall, who opened their account with a convincing win in the individual time-trial on Tuesday evening, retains the leader’s jersey with a combined time of 3:23:31.

His squad mates JC Nel of South Africa and Till Drobisch of Namibia occupy the second and third positions in the overall standings in 3:24:21 and 3:25:00 respectively.

Despite their comfortable lead, MTN-Qhubeka team manager Andrew Smith said his riders had gone all out for the stage win.

“It was up to these guys to protect Nic and keep him in the yellow jersey and they did a good job of that. But their aim was not just to defend and control but to race aggressively, which they did.”

The stage started with a 25km neutral zone from the Allée Bleue wine estate near Stellenbosch through the town of Franschhoek.

Turning onto the Wemmershoek road, the bunch went into racing mode, with international track star and Franschhoek resident Nolan Hoffman taking the sprint prime at the 37km mark.

After passing through Paarl, a split of 14 riders went off the front on the gravel climb towards the Taal Monument. The East Africans pushed the pace on the ascent, with Gebresilassie taking the king of the mountains hotspot at 47km.

The two youngsters worked together along the new Helshoogte road through Pniel and into Stellenbosch. They were finally reeled in on the first of two circuits over the old Helshoogte pass with 20km to go.

On the second loop, about 5km from the finish, Gebresilassie, Yohans and Hadi broke clear to power their way to a hilltop sprint finish.

According to Smith, the East Africans’ stage results were just reward for their hard work in supporting their South African team-mates at the recent national champs. “We wanted one of them to take the win today.”

He said Hoffman would be the danger man to watch on Friday’s final stage – a twisty criterium featuring several punchy climbs.

Hoffman, who is riding as a guest of ASG, said he was looking forward to the short, power-based stage.

“I hear there are some kicks and a few hills. As long as there is a bunch sprint, you can put money on me being in there.”

He said he had been very impressed with the performance thus far of the junior riders on his invitational team.

“Some of them managed to stay with the main bunch, so that was a solid result. I’m pretty impressed with them and it’s good to see the progress they’ve made.” 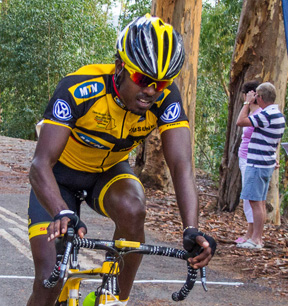 MTN-Qhubeka’s Ethiopian climber Estifanos Gebresilassie surges to victory on top of the old Helshoogte pass above Stellenbosch on stage three of the 2013 Bestmed Tour de Boland on Thursday. Photo: Capcha