Renay Groustra of South Africa and Daniel Gathof of Germany won the third and final stage of the Rocky Mountain Garden Route 300 mountain bike race in Knysna on Sunday to secure a comfortable overall victory.

The Rocky Mountain-RSA Web team’s time of 3:10:11 over the final 80km was two seconds faster than that of stage-one winners Timo Cooper and Adriaan Louw (Bridge), who had relinquished their overall lead the previous day.

Billy Stelling and Rob Dormehl (V&A Market on the Wharf) finished third on the day in 3:15:17.

Groustra and Gathof completed the third edition of the 300km race in an aggregate time of 12:18:59.

Cooper and Louw, with an overall time of 12:27:46, were more than eight minutes behind after mechanical trouble had effectively sealed their fate on the second stage.

Neil Bradford and Tim Osrin (Harvest Foundation) rounded out the podium in 12:55:43.

Groustra said the win was particularly meaningful as it was his first outing with Gathof, who is a two-time TransAlp winner in the mixed category. “Our sponsors are also title sponsors of this race, so it means a lot to them and us.”

He said they now hoped to secure funding to ride the Absa Cape Epic together.

Their lead of close to nine minutes going into the final day had put the pressure firmly on Cooper and Louw.

The latter rose to the challenge and turned up the heat within the first 10km on Phantom Pass, but Groustra and Gathof were able to match them all the way to the summit.

The two teams stayed together until Louw initiated a breakaway on the big Hydro climb 30km into the race. “We were climbing out of the valley after the first waterpoint when Adriaan went hard off the front,” said Groustra.

Cooper and Louw opened up a 40-second gap on the climb but a patient Groustra and Gathof reeled them in shortly thereafter.

“And then it was easy after that because they knew they couldn’t get away from us and we felt we didn’t need to open up a bigger lead,” said Groustra.

Cooper, the inaugural winner and now twice a runner-up, said he was delighted with his third podium at the event. “Knysna’s always been good to me, so I’m very happy.”

In the women’s race, an under-the-weather Ischen Stopforth and on-form partner Yolande de Villiers relied on their first two stage wins to secure overall victory in 14:04:35.

“I started feeling better in the second half of the race,” said Stopforth. “But we knew we had a good lead on the bizhub girls, so we just took it steady.”

The teams occupied the same positions on the general classification.

Steyn and Du Plessis dedicated their win, which came in 14:44:32, to Du Plessis’ father, who was recently diagnosed with cancer.

Knysna-based Steyn, who is aiming to become the first woman to finish 10 Cape Epics this year, said it was always great to win in her hometown.

“This race was very much an important part of my final preparation for my 10th Epic. It’s such a privilege to be doing it and it was very important to stay safe out there as so much training has gone into it.” 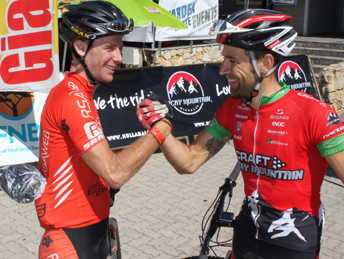