Inaugural winner Timo Cooper will be aiming for a second victory when he takes on the third edition of the Rocky Mountain Garden Route 300 in Knysna from Friday.

Cooper, who won the three-day mountain bike race in 2011 alongside Jacques Rossouw, will be riding with ad hoc partner Adriaan Louw in the colours of new sponsor Bridge.

With one half of last year’s winning team, Adi Enthoven, sidelined due to a vertebral injury, the way is clear for Cooper and Louw to challenge for the title and a share of the R70 000 prize purse, courtesy of First National Bank.

“We’re definitely going for the win,” he said. “It’s the first time we’ll be riding together but we are good friends and really understand each other.”

Cooper, who podiumed in the three-stage Tankwa Trek last weekend with Oliver Munnik, said this was particularly important in a stage-racing environment where partners relied heavily on one another.

“Mechanically, Adriaan is also pretty good, so if there’s a problem with a bike he’ll be able to sort it out.”

They will face off against the Austrian pairing of Philipp Ludescher and René Haselbacher (Team Asrin) as well as Renay Groustra and German rider Daniel Gathof (Team Rocky Mountain).

Cooper said he expected everyone to conserve their efforts on the 100km opening stage as they sussed out the competition. “Our aim is to stay with the front bunch but if we can win stage one, we’ll go for that too.”

As a climber, he said he was looking forward to making amends for last year’s difficulties on the revised 115km queen stage. It was in the sandy stretches across the Western head on day two that he and former partner Jarryd Haley lost their overall lead.

“They’ve taken the sand out but they’ve put some very big climbs in. We’re hoping to make some gaps there.”

Cooper said they would try to put time into the rest of the field on the fast 78km final stage.

Overall, he felt the 300km course played to his strengths. “The climbs are constant and long and the riding is not too technical.”

The Wellington-based rider is no stranger to the Garden Route, having also won the RE:CM Knysna 200 and the Light to Night events last year.

The 21-year-old student said he was in good early season form and was still building towards peak for his new sponsor.

“They approached me after I won the solo category at the Cape Pioneer last year and later offered me a professional contract. It’s just put my career on a whole different level. It’s awesome.” 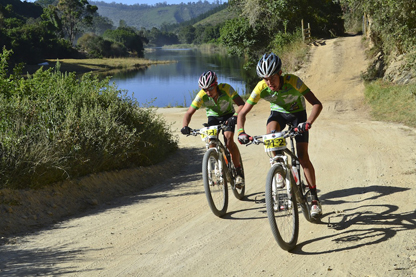