Former Olympic pole-vaulter and reality show survivor Okkert Brits will face his toughest challenge yet when he takes on the three-day Rocky Mountain Garden Route 300 in Knysna from February 22 to 24.

Brits will be participating in his first ever mountain bike stage race as a guest of First National Bank, which is sponsoring the R70 000 prize purse.

However, he said he would not have his eyes on the prize, as he was relatively new to the sport and had only been training for the past 10 weeks.

“The objective is just to finish and have as nice a time – and break as few things – as possible,” said Brits.

The 39-year-old said it was a great opportunity and that he had heard the Knysna event was one of the toughest and most beautiful stage races on the national calendar.

“If you’re not an endurance athlete it’s really hard,” said the former track and field star. “I have no experience and no idea what I’ve gotten myself into!”

Brits, who will be competing in the Absa Cape Epic alongside former Welsh rugby captain Colin Charvis in March, said he needed to test his endurance as much as possible ahead of the eight-day event.

“I need to see if I can make it. The great thing about the GR300 is that I’m really going to find out where my problem areas are.”

He will be riding with FNB’s Mike Howell, who has completed multiple Ironman competitions, in the 300km Garden Route event.

“As a pole-vaulter you pretty much do everything on your own and you know how to sort yourself out. But now it’s different because you’ve got a partner to worry about and you’re both going to have good and bad days.”

Although, weighing in at 105kg, the big man was not looking forward to the climbs, he said he would rely on his skills as a high school BMX racing champion to assist on the technical descents.

“I’ve already had a few proper falls but as a pole-vaulter you make your living out of falling, so I’m used to it,” he laughed.

One of an elite group of athletes to have cleared the six-metre mark, Brits said he had done intensive research into this new discipline and was training as hard as possible.

“Everything is so new but so interesting. It’s tough going, learning what or what not to eat and drink, going to bed early and dealing with pain.”

Never one to shy away from a challenge, he has previously also shown his mettle as a contestant in the celebrity edition of the Survivor: South Africa reality television show.

“For Survivor I initially said no. You’ve got cameras on you all the time and I’m the type of guy who, when I’m hungry and tired, turns into The Hulk.

“But at the end of the day it was one of the best experiences of my life.”

The Port Elizabeth-based athlete said he hoped the same would prove true of his new sporting adventure.

“Every time you try something new, the hardest part is always just before you do it. But it’s an incredible feeling once you’ve conquered it.”

Having completed the 121km Attakwas Extreme Challenge near Oudtshoorn in January and The Herald VW Cycle Tour’s 80km feature race at Addo this month, Brits said he had a newfound respect for mountain bikers.

“I don’t know how people do this. They’re either mad or stupid or just exceptional.”

He will be riding the Cape Epic on behalf of the JAG Foundation, which offers disadvantaged children positive alternatives to the social ills they face through the medium of sport.

To support the cause, visit www.givengain.com. 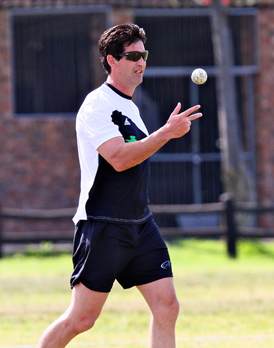 Okkert Brits, pictured here at a charity sports event, will test his endurance at the Rocky Mountain Garden Route 300 from February 22 to 24. Photo: Coetzee Gouws/Fullstop