After almost 100km of pristine forest riding, former champion Timo Cooper and ad hoc partner Adriaan Louw made the decisive move on the final stretch of tar to claim the opening stage of the three-day Rocky Mountain Garden Route 300 in Knysna on Friday.

In a day of shifting fortunes, the Bridge riders finally outsprinted Renay Groustra and Daniel Gathof (Rocky Mountain/RSA Web) to cross the line in 4:28:48, just four seconds clear of their fellow escapees.

Third-placed Austrian riders René Haselbacher and Wolfgang Krenn (Makomo Resources), who were also part of the initial three-team breakaway, overcame illness to finish almost six minutes behind the leaders in 4:36:41.

Wellington-based Cooper, who finished runner-up last year alongside Jarryd Haley, said the racing started at a furious pace up the first hill on the dump road just outside Knysna.

“We eventually got away with two other teams on a climb after about 40 kilometres and we just put in a constant tempo from there.”

Groustra and Gathof built a slim lead on the technical Red Route through the Harkerville Forest, but bad luck struck when they went off course.

By the time they recovered from their misadventure, the Bridge and Makomo Resources riders were just 30 seconds off. Cooper and Paarl-based Louw closed the gap, only to join Groustra and Gathof on another detour.

“We were consolidating with Timo and Adriaan when we went the wrong way again,” said a frustrated Groustra. “That put us about five minutes behind René and Wolfgang.”

However, stomach problems put an end to the Austrians’ efforts and the chasers caught and passed them just before the third waterpoint at the 80km mark.

From there, the two teams rode together to the finish and in the end it was Cooper and Louw who had the legs to secure the win.

“There are still two more days,” said Groustra. “It’s now up to Timo and Adriaan to lead the way, so we can just focus on what we’re doing.”

His German partner, who is a two-time TransAlp winner, is expected to come to the fore on Saturday’s 115km queen stage, which features a total ascent of 2 300m.

“But this single track is good for me too,” said Gathof, who is participating in his first mountain bike race on South African soil. “I don’t need all this climbing!”

Despite technical problems, Yolande de Villiers and Ischen Stopforth, riding in the colours of Garden Route Events, took the women’s category in a comfortable 5:08:10.

They finished more than 10 minutes clear of bizhub’s Catherine Williamson and Nicci Grobler (5:19:56), with Salomon’s Janine King and Jackie Moore a further 12 minutes back.

They were followed home by Lindi Dorfling and Graeme van der Nest (Merrell Mixed) in 5:42:34 with Tanja and Jon Oosthuyse (Totally Stoked) rounding out the podium in 5:46:19. 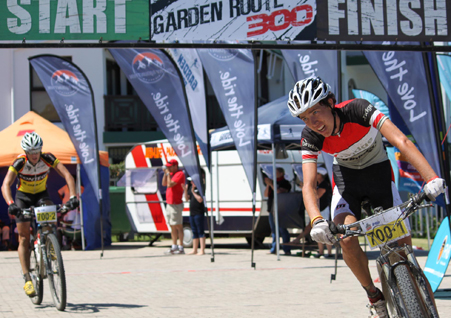