The team did fantastically well despite the flat route that did not suit the riders’ strengths, says team principal Douglas Ryder.

“The route was only announced just before we left. But we went there to be aggressive and get in some good racing.”

And that they did, facing off against the likes of Pro outfit Lampre-Merida and pro-conti teams Europcar and Cofidis.

With all three of his top-10 finishers under the age of 23, Ryder is very positive about what lies ahead.

“Our vision or long-term goal has always been to develop an African world champion, which isn’t possible if you aren’t racing at the highest levels of cycling. MTN’s continued support and ‘can do’ attitude coupled with the success of the team internationally over the past two years has made this next step possible.”

And taking that step up from a third division Continental team has not been without its challenges and stresses, he says.

“It’s a significant leap from an ethical, financial and administrative point of view.
You need a minimum of 16 riders and three sport directors that have to be accredited by the UCI.

“Our management company gets audited by Ernst & Young in Switzerland to check that we are fit to run a team at that level. They look at the long-term future and sponsors’ commitment, as well as your support of the blood passport programme and ethics as a clean team.”

If the UCI is not happy with any of the above then they simply do not issue a licence to compete, says Ryder, whose riders will now divide their time between Johannesburg and the Italian city of Lucca.

With the precious licence and a new sponsorship from Samsung now in their hands, he says the team must comply with further strictures.

“A pro-conti team can only participate in UCI-accredited races and our national championships, as well as a maximum of two social events in a year.”

“A successful first season for us would be to win the national championships, 10 UCI races as well as top-15 finishes in the UCI Europe Tour and team time-trial at the worlds.

“We also want to qualify as many riders as possible for the world championships in Italy in September.”

In the long term, the goal is to take an African registered team to the Giro D’Italia and Tour de France and show the world that the continent can produce world-beating athletes, as it has done in the sport of endurance running.

For now, MTN-Qhubeka has been granted a wildcard entry for the tough Tirreno-Adriatico stage race and 298km Milan-Sanremo one-day classic in March, which will see the squad compete against the 18 top international teams.

Former U23 world road champion Gerald Ciolek will lead the one-day classics group, while Sergio Pardilla will take point in the stage race.

“Reinardt was a big loss to the team as he was our trump card in international victories . . . Through his performances we saw the rest of the riders step up and believe that success in Europe is possible.”

Although the team has received invitations to a number of events, Ryder says the intention is to build a focused and sustainable programme this year to build a credible reputation ahead of taking on the Grand Tours in 2014 and 2015.

“We made a decision to not bid for a Giro and Tour de France ride in our first year to give the riders more chance of getting used to the racing at this level. We are hoping to get a start in the Vuelta (Tour of Spain) in August.”

The 41-year-old former national captain says he is as ambitious for his young charges as he was for himself.

“I am as driven today in running the team as I was when I was a competitive cyclist. I have always had big dreams and set goals and objectives in everything I do and that has kept me focused.”

After spending 10 years in the corporate world, Ryder says working with the Qhubeka fundraising initiative to put a million people on bicycles by 2020 has enriched his own life.

“It is truly rewarding when the effort you put in is making such an impact on others. It’s humbling.”

And it is that balanced human perspective that will set the African team apart. 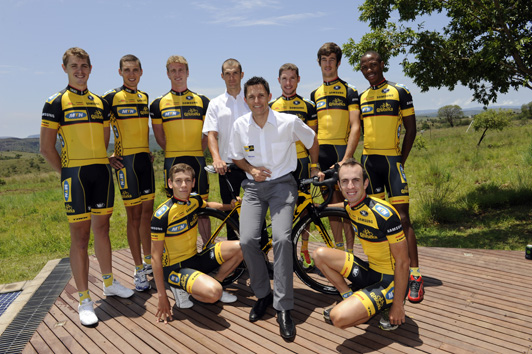