With 25 finishes to his credit, former Port Elizabeth mayor Charles Garai leads the bunch when it comes to The Herald VW Cycle Tour’s exclusive green number club, which is reserved for participants who have done 10 or more editions of the 106km Classic.

Veteran cyclist Garai has come a long way since his rather inelegant finish as part of the Saddle Bums social club in the inaugural event back in 1986.

“I forgot to undo my toe straps and, upon stopping, keeled over in the middle of the road,” he recalls.

The 71-year-old now counts breaking the three-hour barrier, earning his first green number and winning his age category on several occasions as some of his standout memories.

On the downside, he remembers being brought down by a fun rider in a fall within sight of the Hobie Beach finish and missing the 2:59 bunch time by three minutes.

Having clocked a personal best of two hours 47 minutes, Garai says another sub-three-hour time is not impossible with enough training and effort but that these days his sole ambition is “to finish upright”.

“However, that is not the master plan for 2013. We’ve formed a large group under the banner of Atlas Security and will try to bring everyone home in under four hours in memory of Clem Morris, whose ambition it was to break that barrier.”

Morris was killed in a hit-and-run accident while riding his bicycle on Kragga Kamma Road in October.

Garai, who has won championship medals in his age group at national, provincial and club level, is looking forward to the 28th edition of the national classic but has some mixed feelings about the new Slanghoogte climb.

The Walmer resident and lawyer, who races under lucky number 13, says the permanent green numbers will from now on differ slightly in design to distinguish between those riders who have completed 10 and 20 races.

“A minute’s deduction off your time for every Herald completed would also be nice . . .” He has only missed two outings, in 1997 and 2008, because he was overseas at the time.

Garai, who was first citizen from 1993 to 1994, also holds the distinction of being the only mayor to fire the starter’s gun from the seat of his bicycle and then pedal off into the sunrise to join the race. “And they never even gave me a head start . . .”

He believes the cycle tour could grow into a major tourism drawcard for the metro and cites the example of the Cape Argus Pick n Pay Cycle Tour, which he has also completed 25 times, as an example of what can be achieved with municipal support.

“The Cape Town event is world famous and attracts entries from something like 40 countries.

“They limit the field to 30 000 starters, have an expo running over several days which draws over 100 000 visitors and the overall spend in the city is huge.”

The PE event is an official seeding race for the Cycle Tour and takes place on February 3.

Riders can apply for green number status by submitting their contact details plus ID and RaceTec chip numbers to heraldcycletour@timesmedia.co.za before December 20.

Enter at www.heraldcycletour.co.za before January 21. Only online entries will be accepted for the Ultimate Quest. 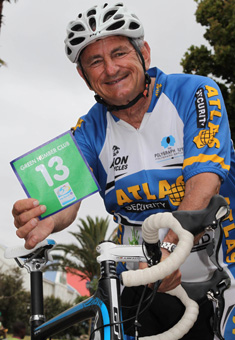