Rocky Mountain Bicycles has renewed its title sponsorship of the Southern Cape’s premier stage race, the Rocky Mountain Garden Route 300, which takes place in and around Knysna from February 22 to 24.

The upmarket Canadian bicycle brand, which has had a presence in South Africa for almost three years, confirmed its commitment following a sell-out event this year.

According to Rocky Mountain brand manager Eugene Haley, the race had all the hallmarks of becoming one of the top stage races in the country.

“This is our second year of sponsorship and we anticipate this relationship continuing for at least the next couple of years.”

Haley said the 300km race, which follows a clover-shaped route through indigenous forests and mountains, represented the kind of riding at which Rocky Mountain bikes excelled.

“Because the bikes are tested in Canada on what are considered to be the best, toughest and most technical mountain bike trails in the world, we feel they are ideally suited to withstand the rigours of riding in South Africa.”

He said the title sponsorship would include a cash component as well as a range of lucky draw prizes. These include a full-carbon 29-inch bike worth R40 000 and Evoc product giveaways valued at R10 000.

Local pro team and this year’s runners-up, Jarryd Haley and Timo Cooper, riding in the sponsor’s colours, would return for a crack at the title, said Haley. Cooper won the inaugural event in 2011 with Jacques Rossouw.

“We will also be pairing Renay Groustra with German rider Daniel Gathof, who has had multiple podium finishes for Team Rocky Mountain in stage races like the TransAlp.”

Riders will compete for an overall prize purse of R70 000, which is sponsored by First National Bank.

Race director Patric Mosterd of Garden Route Events said the race, which is limited to 300 two-person teams, was quickly becoming a must-do event for riders preparing for the Absa Cape Epic.

“Day one is fast and flat with lots of single track. It incorporates the famed red route in the Harkerville Forest and rates as one of the most beautiful rides in the country.

“Everyone who owns a bike and comes to Knysna does the red route at least once.”

On day two, organisers had been forced to make a major route change and riders would no longer be going over the Western Head, said Mosterd.

“It’s a big sandpit due to logging of trees at the moment, so we’ve changed direction completely and will be heading into the hills and indigenous forest. The route now goes through the nearby Rastafarian village, so it’s going to be a winner.”

He said day three would remain unchanged and followed one of the original Epic stages.

The Cruise Café on the lagoon will be the daily start-finish venue. 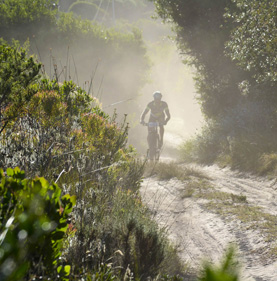 Canadian company Rocky Mountain Bicycles has confirmed it will sponsor the Rocky Mountain Garden Route 300 stage race, which takes place in Knysna from February 22 to 24, for a second year running. Photo: Julie-Ann Photography