Garden Route women up to the challenge

Hundreds of female runners along the Garden Route took to the streets of George at the weekend to raise money for charity.

The women-only event – which followed an undulating course through the suburbs of Heather Park and Rooirivier Rif – offered 5km, 10km and 2km relay options.

“We decided to hold a women’s race as we wanted to do something different,” said Heather Park SUPERSPAR owner Duncan Brown.

“We also wanted to add a fun element, so men were allowed to enter if they were dressed in drag.”

Brown said pupils from the school held a market day at Heather Park SUPERSPAR every Thursday to raise funds and this gave him the idea to use the race as a platform to support their efforts.

He said they were hoping to attract more than a thousand runners to next year’s event. “Our aim is to help people in our area while having some fun, but we need the support of the community.”

Race organiser Danie Raubenheimer, from the George Nedbank Running Club, said planning for next year’s event would start soon and that businesses and schools would be their main focus.

“We would also like to get more top athletes to take part because children love to see their heroes in action.”

Go to www.facebook.com/sparinaction to view some fun photos of the race and to keep abreast of SPAR’s initiatives in the Eastern Cape. 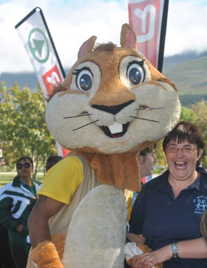 Squillo the mascot with one of the Up for Down’s pupils at the Heather Park SUPERSPAR Sunrise Women’s Challenge that took place in George on Saturday. Photo: Supplied