Written for Legends of the Pedal

It’s been a long and winding road from the sporting wilderness to Cycling South Africa president, but for Willie Newman the sacrifices along the way have proved worth it.

One of the youngest Legends of the Pedal, 52-year-old Willie has been a road and track cyclist for most of his life, but you won’t find his long list of achievements inscribed in the annals of the former SA Cycling Federation (now CSA).

As an extension of the apartheid government’s policies, Willie was forced to compete under the auspices of the SA Cycling Board, which was the parallel governing body exclusively for coloured cyclists.

“I was national champion on our side across both disciplines for a number of years. So when Johnny called me to join Legends of the Pedal two years ago, I thought, ‘This is a breakthrough’.

“People don’t realise that aside from the white bodies there were the equivalent coloured and black organisations competing and they had athletes of a very high standard. The fact that I come from that heritage shows we were good enough.”

He cites his mentor, Crown Cycles owner and former sprinter Willie Cloete, as a standout example. “He is a true legend and guys like that need to be inducted into our hall of fame.”

The Capetonian says he would love to have tested himself against stars like Johnny Koen and the late Alan van Heerden, but this was never possible. “I followed their riding and always compared their standard against mine.”

Although the government made concessions in the early seventies with the introduction of so-called multinational sport due to international pressure, Willie says he refused to compete.

“It wasn’t non-racial; they would allow people of colour to take part in ‘white’ competitions for a restricted time only, but they wouldn’t try to fast-track change in society.”

As a member of the macro body the South African Council on Sport (Sacos), Willie says he was bound by their strong protest stance of “no normal sport in an abnormal society”.

He is proud of what he terms “necessary sacrifices” and says the highlight of his cycling career was in the Sacos environment.

“We couldn’t compete internationally, so Sacos decided to hold one big sports festival and they selected a ‘South African’ cycling team to compete against the rest of the provinces.”

As Sacos champion in everything from the sprint to the endurance events, Willie was the natural choice to lead the team. “I was very proud.”

In the early nineties when Nelson Mandela’s release from prison signalled that change had finally come, previously marginalised riders were integrated into the SACF.

Then 32 and working full-time in the IT department of a major investment company, Willie decided to focus purely on the track.

By then he was too old to be seriously competitive against the younger riders in the elite category but at masters level he came into his own.

“When I raced on an even playing field, I won quite a few titles against those guys whose careers I’d mirrored.

“So to me the big question was: What if? What if South Africa had been a normal society? What if I’d had those opportunities?”

He went on to represent the country three times at the Masters Track World Championships in Manchester, England, where his best results were fifth in the sprint in 2000 and eighth in the 20km points race in 2005. Due to CSA commitments, he last competed at national level in 2010.

Coming from a cycling-mad family and working in his grandfather’s bicycle shop during school holidays, the Kuils River resident says he was always destined to be immersed in the sport.

After taking up competitive cycling at the age of 17, he was simultaneously thrust into administrative positions due to the nature of the divided structures.

“I was a top cyclist and at the same time I had to be secretary of a club, secretary of the Western Province Cycling Union and still organise races – all things our cyclists take for granted today.”

The former manager of the national elite road and track teams attributes his success to sheer hard work and dedication, the support of his wife Sonja, as well as the capable administrators who showed him the way.

“They were the giants on whose shoulders I could stand. I view it as a great achievement for all people in the non-racial fold for me to be a democratically elected president of CSA today.”

Willie was first invited to serve on the board by then president Lawrence Whittaker in 2006. In 2010, he was elected vice-president under Greg Till and finally started his four-year stint in the hot seat in May this year.

“I’ve come in at the end of an Olympic cycle and am picking up the new one, so yes, I’ve come in at a very good time to drive the goals and objectives we’ve set ourselves.”

Among CSA’s lofty ambitions are to rank in the top 10 across all disciplines by 2020 and field a team of at least 18 qualifying riders for the Olympic Games in 2016.

“I’m very confident that we can medal in the Commonwealth Games in 2014.”

He says corporate support is essential to the success of the high performance programmes. “If we produce more champions, more youngsters will become interested in the sport and it will go from strength to strength.”

Although the country has made many positive strides, Willie says there are still many challenges that lie ahead.

“These days, cycling is seen as an elitist sport. We need to make it accessible to all and break down those entry barriers – CSA has got a huge role to play in that.

“School sport and club development are issues I’d like to fast-track. I’d like to see communities get involved like we did. Then when youngsters come through those clubs and go on to great things, it will be a source of pride.”

Holding what is strictly a volunteer position, the CSA president and father of two pays the bills these days as a computer consultant to small businesses. But he hasn’t lost his love for cycling.

“I still do an hour or so early in the morning a couple of times a week. It’s amazing what you can get done on the bike in terms of planning and ideas, so I find it very beneficial to ride as often as I can.” 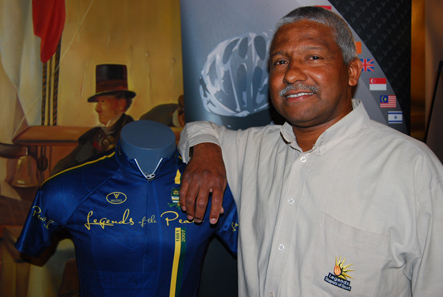