Vehicle sponsor Subaru Pietermaritzburg has bolstered its ongoing investment into mountain biking in KwaZulu-Natal by reaffirming its commitment to the FedGroup Berg & Bush, organisers announced this week.

The partnership with the off-road event will see various models, such as the Subaru Forester, Outback and new XV, put to the test on challenging terrain that includes mountain passes, district roads, cattle and game tracks, and purpose-built cycling routes.

According to organiser Gary Green, much of the route would be inaccessible without the support of the long-standing sponsor.

“The vehicles are as good off-road as they are on normal roads and that’s why we chose them,” said Green.

Participants in the three-day Descent will depart from the Sterkfontein Dam in the Free State on October 26 before plummeting down the escarpment into KZN and finishing at Winterton in the Central Drakensberg.

The newly-introduced Great Trek follows the same route from October 30, while the original event, which stretches over two days, rounds out proceedings from November 3.

Green said the vehicles would also be used to ferry riders in the three-day events back to their own cars from the finish venue at Winterton Country Club.

“For us, the safety of our riders is paramount and the Subarus’ road-holding ability is an important factor.”

In addition, Subaru Pietermaritzburg owner Howard Christie said his dealership would transport riders to the summit of Spioenkop Mountain for sundowner tours of this historic battlefield.

“Because we know mountain bikers enjoy a little speed, we’ll also have the new Subaru BRZ sports car on display at the event.”

Christie said FedGroup Berg & Bush participants would also be entitled to a special discount on the purchase of a new Subaru before the end of the year.

The dealership also sponsors vehicles for off-road races such as the Old Mutual joBerg2c, Imana Wild Ride and sani2c, presented by BoE.

Although the Descent and two-dayer were already fully subscribed, Green said a limited number of spots were still available for the Great Trek. 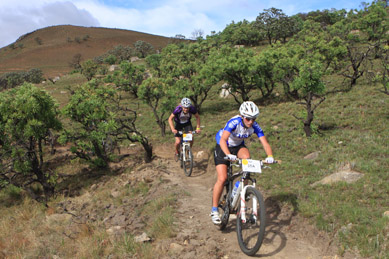 Subaru Pietermaritzburg has confirmed its commitment to mountain biking with its ongoing vehicle sponsorship of the FedGroup Berg & Bush, which starts with the three-day Descent at Sterkfontein Dam in the Free State on October 26. Photo: Kelvin Trautman