The FedGroup Berg & Bush mountain bike race through KwaZulu-Natal is joining forces with Spioenkop Game Reserve to protect its 28 white rhino in celebration of World Rhino Day on Saturday.

With 381 rhino poached countrywide this year so for and 35 in KZN alone, organisers of the 220km multi-stage event have initiated a fund to improve the plight of this near-threatened species.

Because race participants ride through a part of the reserve where rhino sightings are common, local farmer Gary Green said his organising team felt they needed to leave a legacy more lasting than bicycle tracks.

“We as neighbours have watched as financial constraints have had a major effect on this beautiful reserve and its diverse species of game.

“Due to the neglect of the damaged boundary fence, quite a few animals are escaping and this has also made the rhino more vulnerable to poachers.”

While their initial R25 000 commitment will be used for maintenance, Green said any further contributions raised during the event would be allocated to anti-poaching patrols.

“Should any extra funds be left over, we will hopefully, in conjunction with KZN Nature Conservation Services, employ more rangers to police the rhino.”

Although none of the reserve’s rhino have fallen prey to poachers, Green said highlighting the problem was an important part of a preventative approach.

“One of our well-known trail runners and local farmer’s wife Tracy Zunckel will also be running the cycle route to raise awareness.”

The rhino initiative further strengthens the relationship between the two entities, which has previously seen the race finance the purchase and release of Red-billed Oxpeckers, which feed off ticks and other parasites, into the reserve.

“There have now been regular sightings of these magnificent birds on game and cattle in the area.”

Widely regarded as one of the top multi-stage events in the country, the seventh edition of the FedGroup Berg & Bush begins with the three-day Descent and Great Trek on October 26 and 30 respectively, followed by the original two-day race on November 3.

The three-stage races start near Sterkfontein Dam in the Free State, before dropping down the escarpment into KwaZulu-Natal.

On day two (the opening stage of the two-dayer), riders traverse Spioenkop mountain and the adjoining reserve, with the final day’s racing culminating at the Winterton Country Club in the Central Drakensberg. 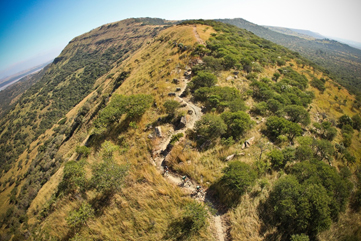 Funds raised during the FedGroup Berg & Bush mountain bike event through KwaZulu-Natal in October will be used to repair game fences and prevent rhino poaching in the Spioenkop Game Reserve. Photo: Kelvin Trautman