Former South African hockey player and University of Johannesburg sports manager Anton van Rooyen finally realised his Olympic dream when he was selected to manage the national men’s team for the London Games in August.

Van Rooyen’s appointment sets the seal on a long and distinguished management career that most recently included seeing his team to overall victory in the Olympic qualifying tournament in Japan in May.

“They had to win that specific tournament, no less than that, and they did.”

He has previously accompanied the side to the Commonwealth Games, Champions Challenge, World Cup as well as the Four Nations and Five Nations tournaments.

“This is my reward for all my years of playing hard and the time and effort I gave to development,” he said. “It’s the cherry on the cake in my passion for hockey.”

The 51-year-old former centre half, who boasts provincial colours for Free State and Griqualand West, has been involved with the sport for over three decades. In 1988, he was a member of the national hockey squad.

As team manager, Van Rooyen is expected to deal with all administrative issues prior to and during the Olympics and act as liaison for players and management.

He said patience, self-discipline and being a good listener were essential qualities, as well as “loving what you do”.

“On tour, I’m in charge of general discipline and looking after the players. A happy player will always perform to his maximum ability.”

Van Rooyen said “The Lads”, as he calls them, had matured together as a unit since 2008.

“We started to build on this group after the last Olympics. Only three members are veterans of the last Games.”

According to him, the team was in good shape following a fitness camp in Bloemfontein earlier this month, but he was circumspect about their medal prospects.

“We must first get through our group stage. If we make the top two in the group, anything can happen.”

The team leaves for an eight-test tour of Ireland and Spain on Tuesday as part of their pre-Olympic programme.

“You always learn new things on tour and I like to share my experiences with other sportspeople,” said the Newlands, Johannesburg, resident.

“When I’m dealing with my students at UJ, I treat them like international athletes.” 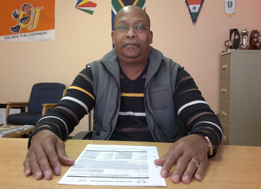 UJ sports manager Anton van Rooyen has been chosen as team manager of the South African men’s hockey side to compete at the Olympic Games in London in August. Photo: Supplied