After last year’s heartbreak, Kevin Evans and David George smashed the course record to reclaim their rightful place as winners of the 2012 sani2c, presented by BoE Private Clients, in Scottburgh on Saturday morning.

The Nedbank 360Life riders took the overall lead after winning the opening stage between Underberg and McKenzie Club near Ixopo, KwaZulu-Natal, on Thursday and did not relinquish it again.

On the third and final day, Evans and George rolled in in 2:21:08, five seconds behind stage winners and team-mates James Reid and Charles Keey, who rode in the colours of Nedbank 360Life-Blend Properties.

Defending champion Max Knox and new partner Mannie Heymans of Ormin crossed the line in 2:23:59 to take third on the day.

Evans, from Plettenberg Bay, and George, from Cape Town, topped the general classification with an overall time of 8:31:33.

Stage victory saw Reid and Keey cement their runner-up spot overall in 8:36:25, with Darren Lill and Brandon Stewart of FedGroup-Itec Connect-Bonitas rounding out the podium in 8:45:18.

“For us it wasn’t important to win every stage; the overall was,” said Evans, who notched up his fifth victory in six outings, two of which were with George.

“I love this race and I’ll keep coming back. The course gets better and better every year.”

His near-perfect record was marred last year when they overshot a turn on the final day to lose the overall lead.

This year, they made no mistakes on the fast 72km final stage from Jolivet Farm near Highflats to Scottburgh High School.

By the first waterpoint after 21km Evans and George, riding with Reid and Keey, had opened up a minute lead on their pursuers, which included Knox and Heymans, Stewart and Lill as well as Nico Bell and Gawie Combrinck of Bell Cycling-Columbia.

Evans said he expected more of a fight from their competition as they went up the first climb. “So we took a chance pacing with our junior team, basically consolidating our lead and making sure we had no hassles coming up to the finish.

“It’s great that James and Charles could win today, they’ve been riding really well and deserve it.”

Evans and George have shown devastating stage racing form this season, claiming both the African jersey at the Absa Cape Epic in April and the Old Mutual joBerg2c two weeks ago.

The two will also be likely contenders at next month’s Trans Germany stage race, which is a solo event.

In the women’s race, early overall leaders Karien van Jaarsveld and Theresa Ralph of DisChem-Britehouse-MTN took their second stage win in 2:46:47, but it was not enough to secure the title after losing almost an hour the previous day with mechanical problems. They slumped to third on GC in 11:07:36.

Overall honours belonged to stage two winners Ischen Stopforth and Catherine Williamson of bizhub-FCF, who came home in 2:54:08 for a combined time of 10:24:11.

Next in were the second bizhub-FCF pairing of Leana de Jager and Nicci Grobler in 3:02:24. They also claimed the runner-up spot in the overall standings in 10:57:52.

“It would have been nice to have beaten them fair and square,” said Williamson, who hails from Britain. “We put so much effort into yesterday going for the stage win because we didn’t know what the time gap was – and paid for it today.”

Ivor Jones and Bridgitte Stewart of Crusader Logistics crossed the line third in 2:52:30 to claim the same position overall in 10:47:36. 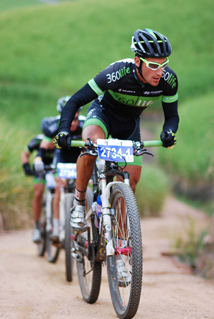