Overall leaders Kevin Evans and David George were gifted the third stage of the Old Mutual joBerg2c when defending champions Neil MacDonald and Waylon Woolcock suffered mechanical problems in the final kilometre of the 125km ride between Reitz and Sterkfontein Dam in the Free State on Sunday.

MacDonald was forced to dismount, handing Evans and George an uncontested victory in 4:21:24 and another R10 000 in stage prize money.

Brandon Stewart and Jacques Rossouw from FedGroup Itec-Connect also made hay while the sun shone to cross the line second in 4:22:02. MacDonald and Woolcock recovered to finish third in 4:23:11.

“It’s soul-destroying but at least we’re on the podium,” said MacDonald. “We were virtually guaranteed a second place today, maybe even the win, that’s why it’s so disappointing.”

According to George, he and Evans had not been gunning for the win after their breakaway of 60km the previous day. “Our plan was to stay on the others’ wheels and just recover from yesterday.”

George said the pace had been fairly steady throughout, with the top five teams – which included Gawie Combrinck and Nico Bell of Transact and Dave Morison and Louis Bresler Knipe of Itec-Connect Vodacom – staying together until after the third waterpoint.

About 90km into the stage, Stewart started setting a relentless pace on a stretch of single track that put the group under severe pressure. When Evans countered, the bunch split into pieces.

According to Stewart, the top three teams were together with around 10km to go. “We knew we had to just roll through together to stay clear of the other guys and let it come down to a sprint.”

However, on the final climb, Evans led another attack which the RE:CM riders immediately countered, followed by George. This proved to be the final nail in the coffin for Stewart and Rossouw.

Yesterday, the Nedbank 360Life pair pledged 10 percent of their daily winnings to purchase wheelchairs for the Cycling for Mobility initiative.

The overall standings in the mixed section remain unchanged with Erik and Ariane Kleinhans of Contego-Giant taking their second stage in a row in 4:39:50 (combined time 12:24:19).

Transact riders Nic White and Grant Usher, who are participating on single-speed machines to raise awareness for the world champs in Winterton in September, placed eighth on the day in 4:33:34 (12:15:26) and are in the same position overall.

Day four over 122km from Sterkfontein Dam to Winterton in KwaZulu-Natal marks the start of the climbing stages. The race finishes at Scottburgh on May 5. 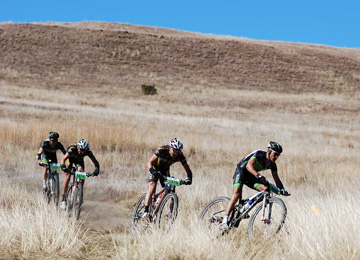