When King of the Mountains Ernst “Ertjies” Bezuidenhout attacked his final climb on Wednesday, February 29, South African cycling lost one of its greatest characters.

Intensely private yet larger than life, Ertjies cultivated a colourful and intimidating public persona, which he fuelled with bravado and backed up with jaw-dropping feats of stamina.

Ertjies won the KOM title in every major event in which he participated. His 1984 Rapport Tour victory was the stuff of heroes and his three Pick n Pay Cape Argus Cycle Tour wins (1981, 1984 and 1986) made him a poster boy during SA cycling’s golden era.

After Ertjies stopped racing in 1987, he dropped out of the public eye completely but by then he was already a living legend. News of his death at the age of 56 was met with shock and sadness by scores of erstwhile fans.

For a look at the man behind the moustache, Cyclingnews turned to former team-mate and long-time friend Johnny Koen.

“I believe he was the biggest brand ever in this country’s cycling history,” said Koen. “More so than MTN or Southern Sun or Alan van Heerden or anybody else.”

Koen said he would always think of Ertjies as “the Alfa and the Omega”, not least because of his penchant for Alfa Romeo cars and Omega watches.

“His cars were beautifully kept and he always wore an elegant watch on his arm but he’d team it with his Springbok blazer, bright red trousers and yellow socks. That was Ertjies.”

He vividly remembers their first encounter at the one-day classic from Port Alfred to Port Elizabeth. “It was 1975 and they’d brought him down as a rising celebrity to come and ride this race.

“I’d won the king of the mountains the year before and he actually baulked me a little, which made me very proud, because I could stick to him. But he beat me at the hotspot and went on to win the race after that.”

Koen said Ertjies became a past master at intimidating his opponents. “He pretended that he’d trained a hell of a lot more than anybody else and it actually worked.

“He’d tell us he trained 160km a day till 11pm in spite of having a full-time job at Iscor. And on top of that, he still towed his cousin Leo van Vuuren over Ertjiesberg every night. I mean what utter . . .”

But the fact that Ertjies was full of veins and muscles and “looked like a racehorse” did little to dispel the myth, said Koen.

“Character-wise he wasn’t scared of anything. I remember at the start of one or other race Van Heerden, who was always very aggressive, came up and started waving his finger in Ertjies’ face.

“Ertjies got hold of that finger and twisted it until Van was kneeling in front of him. And he said in that high little voice of his, ‘The next time I’ll break it right off!’”

Ever full of eccentricities, Ertjies showed his softer side with a penchant for the music of Sonja Herholdt, who was the travelling entertainer on the 1980 Rapport Tour.

“She gave a concert at every stop and Ertjies in his Springbok blazer sat in the middle of the front row on 14 consecutive evenings. We still don’t know why he did that and I think it actually cost him the tour that year because he was just too tired to ride!”

In 1984, Ertjies and Koen left the country’s most successful pro team Le Turbo and joined Realtime Computers alongside Theuns Mulder and Robbie McIntosh.

Koen described Ertjies’ victory in the Rapport Tour that year as one of the bravest he ever saw.

“He got the jersey in the mountains and then had to survive all the way from Durban back to Joburg on undulating roads that weren’t really his territory. But he hung in, we helped and he did it.”

In Koen’s opinion, that was the turning point for Ertjies. “I think he turned himself inside out and was never the same again.”

Three years later, the two helped Van Heerden to a win for the Southern Sun Peugeot team. “Again, that was one of the bravest domestique jobs I ever saw.”

After that, Ertjies stopped racing completely and took a job with Mercedes-Benz in East London, while still promoting the odd race or two. He later moved, with his wife Adri and sons Jacques and Pierre, to Pretoria where he went on to run his own business consultancy.

When Koen started the annual Legends of the Pedal gathering in 2007, Ertjies became one of its most ardent supporters. “The minute the invite went out he’d revert immediately with ‘Dit is bef@k!’ Which was Ertjies for he’ll be there.”

Touching base with former cycling greats like himself inspired Ertjies to get back on the bike and back into shape.

Koen said he took part in a local race about a year ago and, in true Ertjies fashion, attacked on the first hill but was swamped by the bunch.

“He phoned me and said, ‘That’s it, I’m finished, I’m never ever racing again’. If only he’d stuck to that.”

On Sunday, February 26, Ertjies rode his comeback race in the 103km Macsteel National Classic at Carnival City in Johannesburg and suffered a stroke later that day. He had a second one in hospital and passed away three days later.

He will be missed. 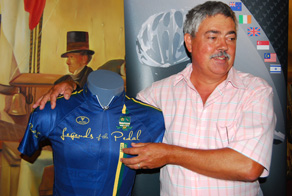 The inimitable Ernst “Ertjies” Bezuidenhout at the 2011 Legends of the Pedal gathering in Port Elizabeth. Photo: Coetzee Gouws