According to Craig Wapnick, the team relay, which forms part of the cross-country trail starting just south of Johannesburg on April 27 next year, was created for riders who long to experience the event, but don’t have nine days to spare.

“Not everyone can afford the time, so this option allows teams to split the race into three separate three-day segments.”

The first leg stretches from Heidelberg to Sterkfontein Dam, a distance of about 330 kilometres. The second, to Underberg, covers in the region of 320km, while the final segment to Scottburgh is a manageable 260km.

Wapnick said that although the relay option had been created specifically with corporates in mind, it was equally suited to teams made up of family members and friends.

“Our aim is to stimulate a corporate riding challenge with fun prizes and a slightly competitive element. Imagine teams from rival banks or cellphone companies going head-to-head.”

He said the regulations allowed for a maximum of six riders per team, but that the relay structure itself was flexible.

“The idea is to have each pair ride a third of the race, but if a team wants three or four riders per stage they may be accommodated at a surcharge per rider.”

Official times will be allocated to the team as a whole at the end of each day’s racing.

Wapnick said the relay option gave riders who were unable to get entries to the sold-out sani2c, presented by BoE Private Clients, an opportunity to experience the event that originally spawned the longer version.

“The last three days of the joBerg2c is in fact the sani2c route. If some of the team members have already done sani2c, they can give their mates a chance to ride this portion.”

He said the linear nature of the 910-kilometre route made it logistically simple for team members to meet up at the overnight stops where the changeovers would take place.

“The first two participants ride from Heidelberg to Sterkfontein Dam, while their teammates drive their vehicle down to meet them. The first pair then drives the car back home, while the second takes over the riding.

“In the same way, at Underberg, they’ll be met by the remaining two riders, who will complete the final stretch to Scottburgh.” Wapnick said a shuttle service would be available at the finish.

Although teams could be accommodated in the race villages for the full nine days, he said individuals would need to purchase the supporter package for the days they would not be riding.

The relay is the most recent addition to a series of initiatives for the 2012 event, which also includes a solo category and “Ride like a Pro” sponsorships for aspiring professionals.

For more information on the various entry and accommodation options, e-mail the race office at kelly@joberg2c.co.za. 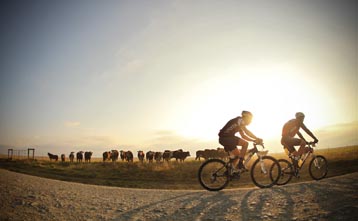