Former South African U/23 road champion Clinton Barrow could be the rider to watch in Sunday’s Mecer-NMMU Cycle Race that takes place on a testing 100km course in and around Port Elizabeth.

The 20-year-old, who rode professionally for the now-defunct DCM team last year, said he was keen to make a winning start for his new team, Mecer-NMMU, where he will ride alongside two-time former champion Conrad Viljoen.

“Hopefully one of us will win. We can both climb and we’re similar riders, so if we keep together, we can definitely help each other to the finish.”

Barrow’s last victory came back in March when he won the Daily Dispatch Felt Tour. Before that, he achieved top 10 finishes in the Tour of Durban and ITEC Dome 2 Dome last year.

“I was off the bike for a while due to all the issues with my previous team, but I’ve been training quite a bit over the past six weeks. I’m feeling better and better every day.”

He said the season-ending race was an excellent way to gauge his form as he looked ahead to re-establishing himself at the top end of the sport next season. “That’s what I’m training for now; to start next season on a high.”

He said the serious racing would probably start on the steep climbs at Maitlands and Three Sisters, about halfway through the race. “That’s where you can get away on your own and take it to the finish.”

The PE-born rider, who started his pro career as a junior with Team Garmin, said he felt a little extra pressure to perform because his new club and its sponsors were hosting the event.

Barrow said he was generally confident about his chances, but would see how he was feeling on the day. “You’ll never know until you’re out there, hitting it full gas with the other guys.”

In the women’s category, the race is wide open due to the absence of defending champion Lindi Dorfling (Team bizhub) and local favourite Anriëtte Schoeman (Nashua-Toyota). Both will be competing in the country’s second largest cycle race, the Momentum 94.7 Cycle Challenge in Johannesburg.

The sixth edition of the PE race gets underway at 7am at the Xerox-NMMU Stadium on the South Campus of the Nelson Mandela Metropolitan University in Summerstrand.

The stadium clubhouse will be open for registration and late entries on Saturday between 1pm and 3pm.

Also included in the day’s events are a 45km road race and various short criterium races for children aged two to 10 years.

Entry forms are available from cycle shops in PE or riders can enter online at www.leisurecycletours.com. 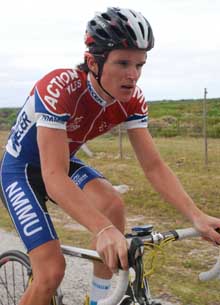