Max Knox and Adrien Niyonshuti’s luck changed course when an error by the overnight leaders handed them overall victory in the Subaru sani2c in Scottburgh on Saturday.

After 78 kilometres of furious racing from Highflats in Southern KwaZulu-Natal, the MTN-DoItNow pair crossed the finish line behind stage three winners Neil MacDonald and Waylon Woolcock (RE:CM) to wrest the leaders’ jerseys from Kevin Evans and David George (Nedbank 360Life).

The latter dropped to third in the standings behind RE:CM with Paul Cordes and Charles Keey (MTN-Qhubeka) moving into fourth overall after finishing third on the final day.

Drama unfolded in the closing stages when leaders 360Life missed a route marker and veered off course, effectively signalling the end of their challenge for the stage and overall victories.

“At joBerg2c nothing went our way,” said Knox, who took his first win after three previous runner-up spots. “You just have to keep your head down and keep going; this time everything worked out for us.

“To be honest, I haven’t felt good for two days. But this is such a great race and I didn’t want to do it an injustice by pulling out.”

Knox said he left 360Life’s appeal in the hands of the judges. “I’m not sure what will happen, but I’ll take it as it comes.”

A disappointed Evans said he and George were going for the stage victory after distancing their rivals on Heart Rate Hill about 15 kilometres from the finish.

“A taxi was kicking up a lot of dust and we missed the turn-off. We realised we had left the course when there were no more markers, so we turned back.”

Evans said it was disappointing to lose the race in such a fashion after having proved over a three-day period that they were the strongest team. “This is not right.”

Following their stage win, MacDonald said they took advantage of the fact that Knox and Niyonshuti were chasing the overall victory after 360Life’s mishap.

“Obviously they were working hard in the front with us just sitting on. They started to fade halfway up the finishing climb and were unable to respond when we attacked.

Catherine Williamson and Candice Neethling (Team bizhub) won their second stage of the race to take overall victory in the women’s section ahead of early leaders Cherise Taylor and Karien van Jaarsveld (USN), whose progress was marred by two crashes.

Hanlie Booyens and Michelle Lombardi (Salomon) were third, cementing the same place in the general classification.

“We didn’t come into the race as firm favourites. The other girls were stronger on paper,” said Williamson.

Taylor and Van Jaarsveld took the early initiative by winning a closely contested first stage, but surrendered their lead through the Umkomaas Valley the following day. “Day two was always going to be decisive,” said Williamson.

Erik and Ariane Kleinhans (Contego) continued their love affair with multistage races this year when they added the mixed title to the one they won at the recent Fairbairn Capital/Old Mutual joBerg2c.

The newlyweds said it was a huge privilege to compete together at the top end of the sport.

“My life has taken a 360-degree turn since arriving in South Africa last year and meeting Erik,” said the former Swiss swimmer. “Sometimes it feels like one big holiday, but the racing is all business.” 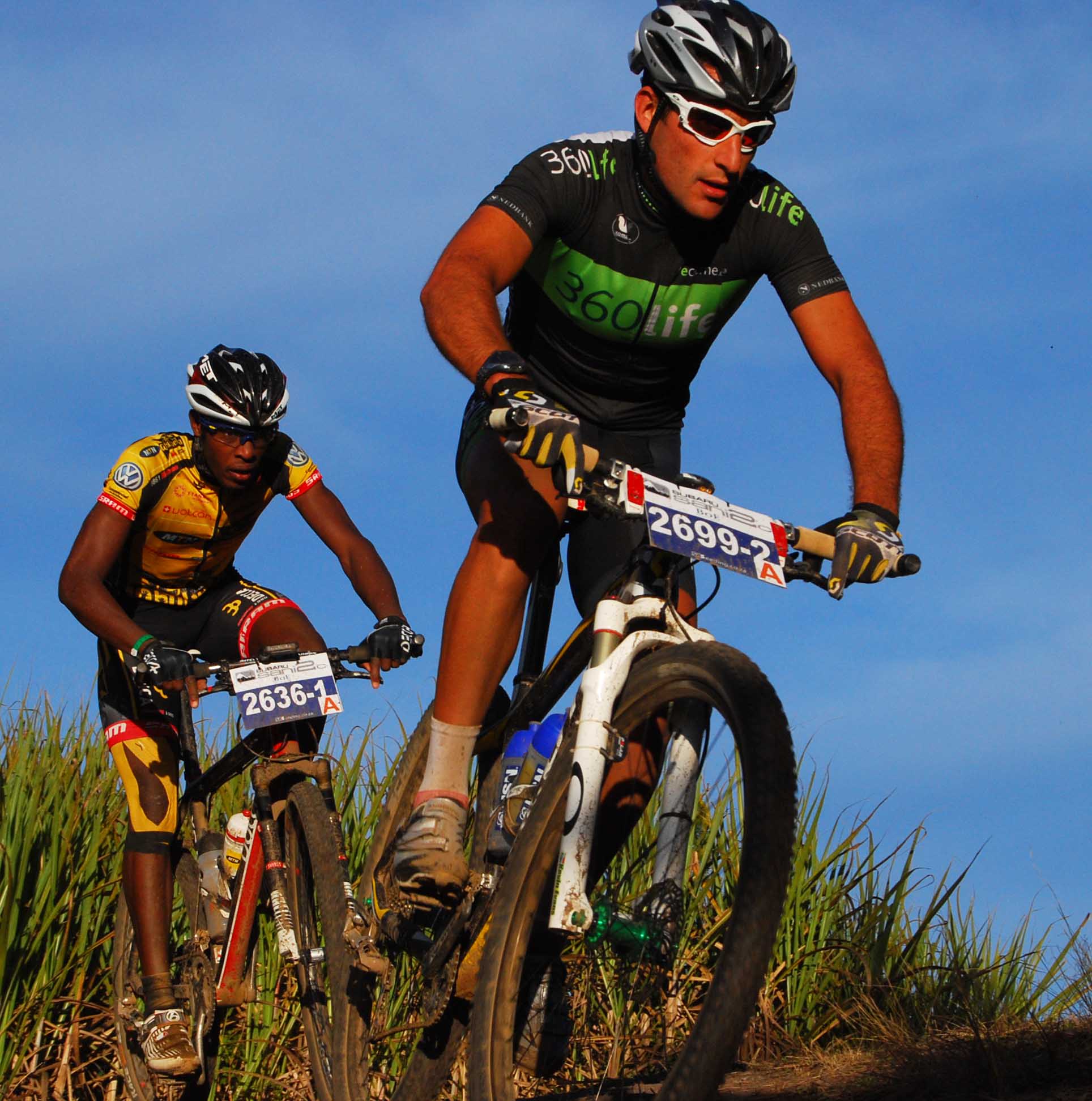 Kevin Evans of Nedbank360Life leads Adrien Niyonshuti of MTN-DoItNow during the third and final stage of the Subaru sani2c on Saturday. Photo: Full Stop Communications